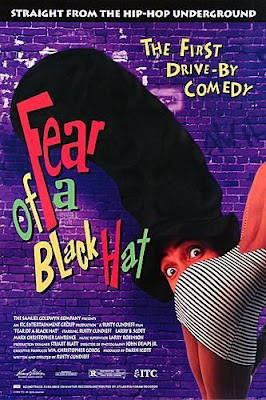 We all like things summed up in five words or less. So it's easy enough to say Fear of a Black Hat is a "rap version of Spinal Tap" and move on, right? But wait. Together, let's resist the temptation to be glib.

In the film's fictional world, the documentary is being shot by grad student Nina Blackburn (Kasi Lemmons), who's doing her thesis on rap as political and cultural communication. Nina appears throughout the film, interviewing the group members.

As the movie begins N.W.H. at a middling level of success. They've made a name for themselves with past minor hits such as My Peanuts, P.U.S.S. Why?, Grab Your Shit, and Booty Juice but still can't get that name on the marquis at their concerts (instead, they're listed as "Special Guest"). In one scene, the backstage bouncer hasn't even heard of them and won't let them in.

That all changes when they release Fear of a Black Hat. On the strength of the strident single Guerrillas in the Midst (as well as album tracks such as Straight Outta Da Butt, Garden Hos, Fuck the Security Guard, and Bald and Buried (Wear Your Hat)) the band blows up. Their album goes to number one, they appear on the cover of Newsweek, and they take over headlining the Monsters of Rap tour.

The boys enjoy their money and fame for awhile, but then, as always, things begin to sour. First, their white, ponytailed manager Guy Friesch (Howie Gold) gets killed in a backstage altercation (he's their 5th manager to die by gunfire). Then, a groupie named Cheryl C. (Rose Jackson) attaches herself to Tasty Taste and begins to sew seeds of dissent in the group by complaining Ice Cold's extra curricular activities (he's landed a starring role in a film called New Mack Village, directed by Jike Spingleton). She's their own personal Yoko, if you will. This eventually creates a rift that drives the band apart (and leads to the accidental death of manager #6, Marty Rabinow (Barry Heins)).

The three embark on very different solo careers. Ice Cold starts the Ice Plant and scores a hit with a dance single called Come Pet the P.U.S.S.Y. Tone Def gets in touch with his spiritual self and forms The New Human Formantics. Their hit song is called I'm Just a Human Being. Finally, Tasty Taste takes out his anger about the break-up on his solo album Extreme Use of Force, featuring songs such as The Ice Man Melteth and Granny Said Kick Yo Ass.

Eventually of course they all realize that they're better together, and make a triumphant return to the stage. As the film ends, they are about to release a new album, The Black in the Hat Comes Back.

Fear of a Black Hat was written, directed, and stars Rusty Cundeiff (he plays Ice Cold). He also wrote the songs that appear in the film. It's a tour de force display of talent, even more remarkable - and curious - for the fact that he's done almost nothing of note since. He did direct and act in some episodes of Chapelle's Show, but that's basically it.

If the cause of his relative anonymity can't be found in the quality of Fear of a Black Hat (and I certainly don't think it can), then the next best culprit is the dismal, dismal, dismal box office performance of the film. Reportedly made for just under $1,000,000, the film grossed just under $240,000. Ouch.

It certainly couldn't help that the film came out a year after Chris Rock's CB4, a film with an identical premise (if very different execution), a bigger budget, and a higher-profile cast.

Even considering all of this Fear of a Black Hat is very watchable and frequently quite funny. It also provokes a thought or two.

As you can see, the film has a lot of fun making up fake songs and albums. There are also lots of fake artists among N.W.H.'s tourmates are MC Slammer (who has recently dropped the "MC"), The Jam Boys (their chief rivals), Vanilla Sherbet (a token white rapper), Yo' Highness, and Parsley, Sage, Rosemary N' Thyme. Ice Cold also points out his fellow Ices: Ice Tray, Ice Coffee, Ice Water, Ice Box, Ice Berg, and Ice Cup. Save this last batch and the Jam Boys, each of them is analagous to an existing rapper: Vanilla Ice, Queen Latifah, and Salt 'N Pepa, namely.

N.W.H. themselves are not a specific parody of anyone, though they contain similarities to N.W.A. (in nomenclature and appearance), 2 Live Crew (in their outrageously bad taste), and Public Enemy (mostly musically, though Tasty Taste is an obvious Flava Flav stand in, especially when he's seen wearing a full size trophy on a chain around his neck).

When the N.W.H. members go solo, the musical parodies become even more obvious. Ice Cold's Ice Plant project is a C & C Music Factory clone, replete with a they-got-a-skinny-girl-to-lip-synch-for-a-soulful-black-woman controversy. Tasty Taste's Granny Said Kick Your Ass is an LL Cool J homage, and The New Human Formantics are a spot-on P.M.Dawn take-off. Cundeiff has a lot of fun time creating videos for all of these tunes, many of them parodies of the original videos in question.

And then there's the question of the film's message. You might say, it's a comedy, do we have to talk about this? Yes, yes we do. Like Spinal Tap, Fear of a Black Hat elevates the pomposity of the musical and famous to cartoonish levels. Unlike Spinal Tap, this film also has the job of confronting stereotypes about race. By 1994 rap had split into categories: party, socially conscious, politically conscious, and gangsta. At various times N.W.H. fits into all categories, but mostly they're the final one, the one that was most riddled with violence and misogyny. Though that brought fame and fortune to its purveyors, it also helped further negative stereotypes about African-Americans while at the same time making them seem attractive and desirable. To some degree gangsta rap reflected the reality of black life in urban areas, there's no denying that. But did some rappers stretch that reality? No doubt.

What it ultimately left us with is a picture of rappers (and black men, by extension) as violent, short-tempered, gun-toting thugs with little respect for women, laws, or themselves. By ratcheting these stereotypes up to 11 in the film, Cundieff becomes an equal opportunity offender. Not only is he making fun of people who believe the stereotypes (something that Dave Chapelle excelled at on his show as well, by the way), he's also taking the piss out of the rappers that indulge in ridiculous levels of excess and self-mythology. Near the end of the film, the Jam Boys and N.W.H. participate in a Rappers Against Violence program at an elementary school. After a showing of N.W.H.'s video for A Gangsta's Life Ain't Fun (which features the group in hot tubs with topless women, surrounded by stacks of cash and champagne), it quickly devolves into a game of one-upmanship over who's harder. Tone Def takes credit for the Savings and Loan scandal. Tasty Taste claims to have been shot with a bazooka ("He used to be 6' 4"," Ice Cold adds). Then they reveal that one of the Jam Boys attended prep school and was on the tennis team, yearbook staff, and in the glee club, and that his gangsta cred is nonexistent.

Also like Spinal Tap, all three lead characters are more than a little dim. And though the guys in Tap took themselves too seriously, they rarely claimed to be doing anything beyond making entertainment. Spurred on by Nina's questions, the band (especially Ice Cold) try desperately to claim social and political meaning in their songs. First they describe their name as a tribute to slaves who couldn't wear hats while working in the fields, which then made them too tired to rise up and rebel. Then they try to justify clearly misogynistic lyrics to songs like Booty Juice ("the butt is like society, and the white man wants to keep it closed up") and Come Pet the P.U.S.S.Y. ("It stands for 'political unrest stabilizes society, yeah'").

Kurt Loder appears twice as basically himself, but without his usual MTV News backdrop. Instead, he has a hastily and poorly assembled backdrop.

The actor who played Tasty Taste was Jerry a.k.a the black Cobra Kai in Karate Kid!

Mark Christan Lawrence (Tone Def) has done a ton of TV work in his career. Most recently, he is the manager of the Buy More on Chuck.

Speaking of that character, he's a fountain of weird / funny quotes. Here are some:
Kasi Lemmons (Nina Blackburn) is also known as a Victoria Madsen's friend in Candyman.

The film provides a good joke for your next party. Q: What's the difference between a ho and a bitch? A: A ho fucks everybody. A bitch fucks everybody but you.

A film without a country, so to say, Fear of a Black Hat is nonetheless a movie that manages to be charming and appealing while trying to piss you off. Though overlong in places, it nonetheless deserves gang status (that's the urban version of cult status, by the way).
Posted by Paul V. Allen at 3:49 AM