Author's Note: This is a special entry. This movie concerns a band that never actually existed. This type of film has a small but interesting canon, including Eddie and the Cruisers, Almost Famous, Spinal Tap, and That Thing You Do. The Commitments is the head of the class. 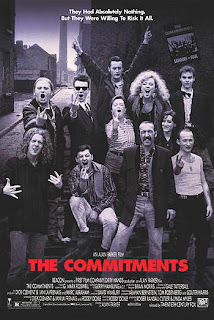 A high school acquaintance once told me that the best bands in the world could very likely never be heard of by the masses. He didn’t expand on this comment, but I assume he meant that there were many bands who formed, were absolutely wonderful, and for some reason broke up or faded away before even recording a note, let alone getting signed to a label. The Commitments is a movie about that very thing.

And I’m sorry if that ruins any suspense, but that’s exactly what makes this movie so refreshing. It’s not the typical retread of A Star Is Born. We don’t have to put up with any rise, fall, and triumphant return.

Jimmy Rabbit is an indefatigable motor-mouthed make-it-happen sort of fellow who still lives with his family. He gets it in his head to form a band, Lou Pearlman style. One of his musician friends, ruminating on his credentials in music, mentions that he was into Frankie Goes To Hollywood before anyone else. Is this really a ringing endorsement?! We’ll never know why the writer of this film chose that band as a touchstone, and probably never should. This scene is redeemed by a very funny discussion of potential band names, musicians who have died prematurely, and influences.

So, against his Elvis-loving Dad’s (played by Lt. O’Brien from Star Trek: Deep Space Nine) wishes, Jimmy starts holding auditions for the band. This scene tickles the funny bone. Eventually he has the makings of a band, including a sax man who claims to have played with a plethora of Motown legends, a bespectacled drummer, and a gregarious singer whom we have seen in an earlier scene, singing drunk at a wedding.

The band, now reaching E-Street Band / Parliament / Talking Heads-circa-1984 size, also adds three hot female back up singers. This is nice, but other than a frankly strange plot involving the sax player sleeping with all three of them, we don’t get much time with the ladies. In fact, there are so many characters in the movie, you tend to come away feeling as though you don’t know any of them well.

Anyway, the band begins practicing various soul, funk, and blues classics, but it’s not until they’re all taking the bus home and begin singing together that their sounds starts to gel. I must point out here that this scene predates the much-ballyhooed singing-Tiny Dancer-on-a-bus scene in Almost Famous by nearly 10 years. Shame on you Cameron Crowe! So the band gets good, gets a couple of gigs and things look great.

But inner turmoil begins to pull at them. This is very cool to see, as the contrast between their onstage harmony and off-stage bickering is very stark. It goes a small way to answering the pained questions of every fan who has seen his or her favorite band buckle under the pressure of interpersonal relations, even though the music they make together is so wonderful. Fleetwood Mac fans, I’m thinking of you here.

So the band breaks up after a particularly transcendent gig, and a particularly nasty backstage melee, and the movie ends Fast Times At Ridgemont high style, as we learn what happened to each member after.

The guy that plays Jimmy Rabbit is a poor man’s Jude Law. Discuss.

Look for Glen Hansard (of Once fame) as guitar player Outspan Foster.

There’s a frighteningly long extended close-up of the lead singer’s face in their wonderful version of Otis Redding’s Try A Little Tenderness. Watch out for this. You may want to have a magazine ready to look at when you become nauseous.

Overall, a worthwhile film for your average music fan, and the soundtrack is probably worth the purchase too.
Posted by Paul V. Allen at 3:49 AM

The point of the Frankie Goes to Hollywood exchange is that Rabbitte was into the band before anyone else was, and then realized that "they were shite" before anyone else did. It's saying that he is attuned to trends, but is also able to discern quality from the merely trendy.

I have a friend who is fond of saying that "Somewhere the greatest band in the world is playing, and we're missing it," and this movie always reminds me of that.