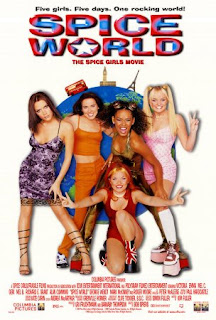 Let’s look back at those halcyon days when Hanson were still cute, the Backstreet Boys and N*Sync were only popular in Europe, and Britney was getting her braces off. The Spice Girls were both the rulers and the harbingers of the mindless pop renaissance. They were a genuine British phenomenon, and not surprisingly one that translated over here on the other side of the pond. So of course, they got their own movie…

Emma, Mel C, Mel B, Geri, and Victoria are the Spice Girls, a mega-popular singing group who drive around in a bus painted to look like the Union Jack. They each have a distinct personality designed to appeal to a variety of different fans, and they dress and act accordingly. They also have varied hair colors and bust sizes.

Like I said, the girls have some adventures, and then the big question is: Will they be able to make it to Albert Hall in time for their concert? I think you know the answer to that!

Okay, I’ll admit that I’m starting from a weakened viewpoint, but I actually kind of enjoyed this. If pressed, I have to call myself a Spice Girls fan. I own two of their albums, and one of Melanie C’s solo albums, and I even have a Spice Girls ruler. I think they are cheesy and somewhat hot. And they had some good songs.

Even so, I really think I was expecting the worst from their movie, and thus was pleasantly surprised by its relative (to my own expectations) quality. Yes, it’s a consistently cheeky movie, but I blame that on Britain. There are some genuinely surreal touches. In particular I’m thinking of Roger Moore’s role. As manager he sits in a small room and plots malevolently. It seems to be an allusion to Bond villains, which would have been funny if it were just a cameo, but instead he keeps showing up and it becomes less and less interesting. Also, there’s a completely inexplicable scene in which the girls stop the bus to go use the bathroom in the woods and end up having an alien encounter. The joke is that the aliens even know who they are and want autographs and concert tickets, but it’s just so left field. And, one of them actually feels up Mel B.!

I have to believe that in addition to A Hard Day’s Night (a blueprint for a group film), the film’s creators also watched Head. This is evident in the slightly psychedelic opening, the meta-movie ending (more on that in a moment), and the way the Girls poke fun at their own image and fame. There’s a scene where they discuss their “personalities” and wish to break free of the way they’ve been stereotyped (or manufactured). Then they switch roles, and it’s a genuinely great scene.

There’re a couple of scenes where they discuss the fleeting nature of fame, which is especially poignant for this group, considering how quickly they went from dizzy heights to bargain bin. But they do get a dig in at Hootie and the Blowfish, and Elvis Costello has a great, self-deprecating cameo.

Watch for the appearance of the sixth Spice Girl, the Asian one. Her presence here (besides as a plot device) is never clear.

I learned a new British phrase while watching this movie, and expanding my knowledge of colloquialisms always makes me happy. It happens after they hear a fart type of noise, and Mel C tells Mel B to “pack it in.”

Besides the great appearance of Elvis, there’re a few other cameos to watch for. Elton John is easy to spot, as is one of the Ab Fab woman. But sharp eyes might miss Bob Hoskins, Jools Holland, and Bob Geldof.

There’s a sweet little flashback scene where they recall their early days, and perform “Wannabe.” This scene recalls the video for that song in a few good ways. And if you’ve seen that video, you know what I’m talking about.

There’s a scene where one of the Girls answers a questions with the old rhetorical “Is the Pope Catholic?” response, and it causes a media furor. Call it obvious, but that’s great parody, mirroring John Lennon's "The Beatles are bigger than Jesus" comment.

This movie uses the Purple Rain freeze frame ending, but in an unconventional way. Onstage, the girls all freeze in place while the camera keeps rolling. Nice twist!

Spice World probably won’t stand the test of multiple viewings, but it’s good entertainment. The purpose of a pop star movie like this is to increase the goodwill and camaraderie you feel for the pop stars, and this movie succeeds in that. Besides seeing the Girls pillow-fighting in lingerie, you couldn’t ask for much more.
Posted by Paul V. Allen at 3:49 AM