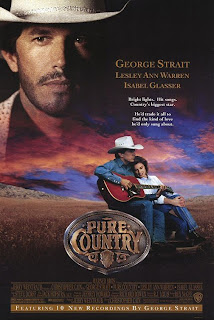 Ideally, pop music movies serve two purposes. Not only are they a cash-in on a musician's popularity, but they have the potential to drive that popularity to a previously unseen level. With Pure Country and George Strait, that's exactly what happened.

In 1992, Strait was on an impressive 11-year winning streak. Of his 12 albums, 8 had gone to number one on the country album chart. 22 of his singles had reached the top spot on the country song chart. The soundtrack album to Pure Country, featuring all Strait songs, sold 6 million copies and became the biggest success of his career. And this was in spite of the fact that the movie itself performed poorly - it grossed about $15 million at the box office. If you did the math with me then you know that means that people spent more money on the soundtrack than they did on the film.

What's strange is that despite starring in a Hollywood film and selling so many many records, Strait has never even had a sniff of mainstream pop success. It's just further evidence that the world of country music might as well be in an alternate universe...

Strait plays Dusty Chandler, a bearded and ponytailed country music star at the height of this fame (sound familiar?). He's got a slick stage show, thousands of adoring fans, and a sequined white leather jacket with his name spelled in cursive on the back, but we quickly discover that he's disillusioned with the smoke and lights and deafening volume. He feels like he's playing a part that isn't true to himself. His real name isn't even Dusty, it's Wyatt. He tells his cutthroat manager Lula (played by Miss Scarlet herself, Lesly Ann Warren) that he wants to simplify the arrangements for his next album.

Meanwhile, Lula has struck it up with dashing Buddy Jackson (played by our favorite coach of the Dillon Panthers, Kyle Chandler), a stage hand and aspiring songwriter. In exchange for a little lovin' she's agreed to promote the song, a clever double-entendre heavy rocker called Overnight Male, to Dusty. At the very next show, Dusty performs the song with no problem. However, during the next song, Where the Sidewalk Ends, he appears falls into a dreamlike revelry and stops singing altogether, except no one notices, not his band and not the fans.

After telling Lula that he no longer wants to be her dancing chicken, she coldly asserts that she can replace him easily. He takes a walk and ends up hitchhiking away. Thus begins his own "lost weekend" voyage of discovery, moving from a shave and a haircut to a visit with his grandmother and to the honky tonk where he first cut his teeth as a musician, and finally into the arms of a plucky cowgirl named Harley (Isabel Glasser).

Meanwhile, Lula brazenly puts Buddy Jackson into Dusty's outfit and has him lip-synch his way through the next concert, and - amazingly - nobody notices. Buddy (who clearly isn't too bright) begins to get too big for his britches and demands a recording contract and signing bonus. When Lula balks, Buddy reveals the deception to the media, and all hell breaks loose.

Lula tracks Dusty down, and will do whatever it takes to get him back for the next show in Vegas. Can Dusty resist the siren call of fame, or will the simple life call him home? The film's title might give you a clue to that answer...

Pure Country is an entertaining film, and gets at least one thing completely right: It knows that it lives or dies by providing lots of songs and performance scenes. These aren't skimped on, and the arena sequences are especially impressive. They were obviously filmed live during a real stage show with a massive audience, and yet still have a very controlled, cinematic quality. Elsewhere, songs are incorporated realistically, played on radios or in bars. I've never done a formal study on this, but I'd be willing to be that the more a viewer can connect to the music in a film, the better the soundtrack will sell.

As I watched, I also wondered if this film was intended to be a commentary on the over-commercialization of country music. It's no secret that in the '90s Nashville might as well have been L.A., considering the growing obsession with glitz and crossover success. The songs and the shift away from twang to shiny pop hooks and crossover success (see Garth Brooks, Faith Hill, Shania Twain, etc). The movie seems to yearn for a return to the "sittin' on the porch" roots of the genre. And yet, if the film was intended as a commentary, it was remarkably prescient. Brooks was just at the beginning of his peak when the film was released, and others were still a few years away from theirs.

The warbly version of Heartland that plays over the film's opening credits was sung by George Strait's son. I don't think he'll be going into the family business.

The acting in the movie is roundly solid. Even Strait, a non-actor, does a fine job. Granted, he doesn't have to stretch all that much.

Director Christopher Cain's only other major film was The Next Karate Kid. The less said about this the better.

Watch for the scene when Dusty silently eats breakfast with Harley, her father, and her two brothers. It's painfully awkward and overlong, which makes it akin to the dinner scene in Eraserhead, though thankfully doesn't feature any carving of game hens.

Almost casually, one of Harley's brothers mentions that she wants to earn the money to save their failing ranch by winning a rodeo (in Las Vegas, where Dusty's next show happens to be happening the same weekend - what are the odds?!). This is never properly followed up on though a lesser movie would have made it a major plot point.

Backhanded compliments you should usually avoid on a date: "So how come a beautiful girl like you isn't married?"

Pure Country puts forth the world view that all old folks are grizzled, wise, cryptic, and mentally unbalanced. There are two characters who act as whacked-out spirit guides and spout barely-comprehensible advice. The first is Dusty's Grandma Ivy. Sample wisdom: "There are no answers, only the search." The other is Harley's father (veteran western actor Rory Calhoun, in his final role), a grizzled ranch owner with a voice that sounds like he smoked 3 packs a day for at least 50 years. Sample wisdom: "You know that little white stuff on the top of chicken shit? It's still chicken shit." There's even a sly acknowledgment of the two characters' similarity, when they sit next to one another at Dusty's Vegas show. The movie missed a golden opportunity in not having them hold an actual conversation.

When the news breaks that Dusty has has been replaced by a lip-synching impersonator, the anchor calls it "Milli Vanilli in reverse." I thought that was pretty good.

Did you know that Las Vegas used to be known as "The City of Neons and Nylons"? Me neither.

Does Lula's character deserve the redemption she gets? She does and says at least 5 awful things throughout the film, and at the end she easily gains Dusty's forgiveness and stays on as his manager.

And finally, let's talk about the supposed "romance" between Dusty and Harley, because it's the worst part of the movie. She brings him home drunk from a bar after he gets his ass kicked by her ex-boyfriend. They ride horses together. He neglects to tell her that he's a famous star (I guess she has no TV, doesn't listen to the radio, and is generally ignorant of pop culture). They dance at a bar, stare into each others eyes, and then immediately have a falling-out caused by Lula. He tries to reconcile, but she won't listen to him. He arranges for her to come to his Vegas show, where he sings I Cross My Heart directly to her. At the final moment of the film they come together and...hug. Yup, hug. No kiss. It's a strange moment and leads me to wonder. Did George Strait have a "no-kissing" clause in his contract? Were the film's producers expecting a huge Morman audience? We may never know, but it kind of takes all the air out of the romance angle, and ends the movie on a bum note.

If you were Harley's brother and you had to stand next to her while Dusty sings I Cross My Heart directly to her as she sobs, wouldn't you get a little uncomfortable? If I had to make a list of situations I would not want to find myself in, this would be in the top 25.

As I said, an entertaining movie overall, and it wisely puts the focus squarely on the music. You can't ask for much more, except, maybe, just one little kiss.
Posted by Paul V. Allen at 3:49 AM

Its being turned into a Broadway musical spectacular.

I enjlyed the shlw very much. I have to wonder if buddy jackson was really suppose to to be garth brooks?