But where are Richie, Potsie, Ralph Malph, and the Fonz? 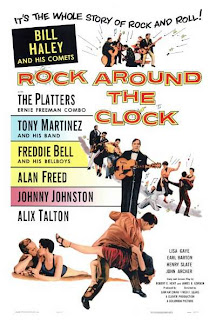 Rock Around the Clock, as you can see on the poster, claims to tell "the whole story of rock and roll!" but that isn't exactly true. In fact, it's barely even the story of its lead attraction Bill Haley and His Comets. That said, it's a fascinating artifact from the infancy of rock, and also a well-scripted, performance-heavy musical.

Our story begins with George Hiller and His Band (apologies to Glenn Miller, I suppose) playing for a crowd of roughly nine people. Their manager, Steve Hollis (Johnny Johnston), confronts Hiller at the end of the set and tells him the obvious: Big band music is not drawing crowds anymore. He says that people want to hear "small groups, vocalists, and novelty combos." He adds, "the only thing that's stayed up to date in this band is your watch." George blames Steve for not doing a good enough job promoting the group. The argument escalates, and Steve quits, taking bassist Corny LaSalle (Henry Slate) with him.

The two decide to head back to New York to look for new opportunities, but Steve takes a shortcut that leads them to the small burg of Strawberry Springs (pop. 1,472), where they decide to stop for the night. It turns out the town is hoppin' on Saturday night, and Steve and Corny end up at a local dance, where Bill Haley and His Comets are playing See Ya Later, Alligator to a group of rapturous teens. Steve, a music industry vet remember, is baffled by this new sound: "It isn't boogie, it isn't jive, and it isn't swing," he says. "It's kinda all of them." Corny asks a dancing teen what they call this music and she responds, "It's rock and roll, brother, and we're rockin' tonight!"

Of course you can see where this is going. Steve and Corny arrange to manage the band (who it turns out are all just local boys playing for a lark), but not without some haggling over percentages, thanks to the band's dancer, Lisa Johns (Lisa Gaye). Lisa's a savvy beauty who Steve tries to manipulate by making her fall in love with him, but the opposite happens.

Thus begins Steve's journey to find fame for the band and his new girlfriend. But it isn't exactly easy. According to the film, the only way to get club bookings in New York is through the Talbot Agency, which is run by the playfully ruthless Corinne Talbot (Alix Talton). Steve and Corinne have a history: She proposed marriage and a partnership in her agency, he declined. So when Steve comes to her office with this new thing called rock and roll, she sees an opportunity, but not in the way you'd expect. Her logic is as follows. If he fails at his new venture, he'll have no choice but to accept her offer. She even says the following line: "When Steve hates me enough he'll realize he can't live without me."

So she agrees to help Steve, but immediately attempts to sabotage him by setting up a gig for the band at a conservative, upscale girl's school in Connecticut. What she doesn't bank on is the power of rock and roll, man. Haley and His Comets go over like gangbusters! Undeterred by Steve's failure to fail and angry about his new girlfriend, Corinne simply goes cold and says there's no future in rock and roll. When Steve once again turns down her proposal, she blacklists him and his group.

Fortunately, Steve is owed a favor by DJ Alan Freed (playing himself), who happens to own a club and is willing to ignore Talbot's mandate. So Bill Haley and the Comets play there, and become a sensation! They get on the cover of Variety, and make oodles of money for Freed. Talbot stubbornly refuses to admit defeat, but then comes up with one last masterstroke: She'll offer a three year deal to Steve, Corny, Lisa, and the band, but with one little addendum to the deal: Lisa can't get married for the duration of the contract. Lisa agrees.

The band heads out to San Fransisco and continues to make headlines, this time landing on the cover of Billboard, while Steve and Corinne work out the details of a televised Rock and Roll Jamboree. The film ends with the taping of the Jamboree, and Lisa coming out to thank "my husband, Steve Hollis." It turns out they got married BEFORE she signed the contract. Corinne admits defeat graciously, and the band strike up the title song. And that's the living end.

If that synopsis makes the movie sound especially heavy on an ancillary storyline with little actual focus on Haley and the Comets, that's because it is. Perhaps the filmmakers realized that Haley himself didn't have the charisma or acting chops to carry the film, or perhaps they couldn't even conceive of making him the lead in those pre-Jailhouse Rock days. Normally a music film giving so much time to non-musicians would be a kiss of death, but Rock Around the Clock makes it work. How? I'm not quite sure, but for a short film (it only runs 77 minutes) it manages to pack in all the above-mentioned story along with no less than 15 performances by Haley and several other acts. And if there's anything we've learned, pop music movies live and die by performances.

Some of the other groups featured in the film are Freddie Bell and the Bellboys (a lively white R & B outfit, often tuxedoed, who reportedly inspired Elvis to record his own version of Hound Dog), Tony Martinez and His Band (think of any I Love Lucy episode where Desi's band is featured), and the Platters (a black singing combo with the hits Only You and The Great Pretender, both of which are performed in the film).

1956 was they year that rock and roll blew up. Carl Perkins' Blue Suede Shoes went to number 1, Chuck Berry released Roll Over Beethoven, Elvis broke through with Heartbreak Hotel, and Little Richard had Tutti Frutti on the charts. Rock Around the Clock was obviously meant to capitalize on a fad. It's surprisingly high-quality considering that. And the film was successful enough that in retrospect it can be seen as not only a product of rock and roll's popularity, but also a cause of it. Kind of like how the film Valley Girl reflected a real speech pattern while at the same time spreading it across the country and making it even more prevalent.

There's even an instructional aspect to the movie. Dancing is a huge part of the film and at one point Steve, arguing for Lisa's inclusion in the band, says "it takes a great dance team to demonstrate rock and roll." Not only that, but Haley and His Comets were not all that exciting as performers, so the dancing was cinematically and visually important. Similarly, the movie trades in a dubiously authentic beat lingo, which Steve has to master before he can communicate with the teens in Strawberry Springs. When he sees Lisa dance, he comments, "They're really good!" A young man responds: "Dig it man, when the most is on the floor, you give 'em room."

What really strikes me while watching the film is how much the definition of rock has changed in the 40 years since, or maybe how much it has narrowed. Many of the songs performed in the film would not even be defined as rock music today, certainly not Tony Martinez' mambos, Freddie Bell's horn-heavy rave-ups, or the Platter's mannered harmonies. Even a Haley song like Rudy's Rock has more in common with jazz than modern rock, and tunes such as R-O-C-K and Razzle Dazzle use the call-and-response of big band and swing music.

During the school dance scene, the three bands (Martinez, Haley, Bell) switch off every song. How does this work with set up of instruments? I mean, have you been to a concert lately? It takes 25 minutes, at least, for roadies to take down one band's stuff and put up new equipment. Then the guy has to come out and strum the guitar and mumble into the microphone for awhile. Either the dance would last 6 hours or you'd only get 3 songs in before it was time to go home.

Let's face it, Corinne Talbot is an awful businesswoman. It's almost as though the film's writers were those type of guys who can't fathom the idea of a woman handling power well, the type of guys who would never vote for a woman for president because they think her mood swings during PMS would lead us to war with Iran. So on one hand, I applaud the film for depicting an uncompromising, successful woman who's unafraid to go after what she wants, but at the same time I condemn it for assuming a woman who has gotten this far in business would let a bizarre romantic conquest affect her bottom line.

Besides that, the film is well-written and full of clever snappy lines. These include:
Lisa's brother (and dancing partner) is named Jimmy. That's right, Jimmy Johns. The film doesn't cover this, but he later went on to start his own sandwich shop franchise.

Also, Lisa and Jimmy as a brother-sister dance combo can't help but bring to mind the episode of Friends where Ross and Monica unleash their dance routine.

This movie doesn't tell the "whole story of rock and roll." It barely tells any of it. Maybe the plot was silly and took too much screen time away for actual musicians, but the film more than makes up for that in performances. Rock Around the Clock is a vital document of an exciting time in pop music.
Posted by Paul V. Allen at 3:49 AM

Thanks for the article. Just watched the movie and wanted to know more.

I just wondered if the movie was anything real about Bill Haley's life. Looking up where he was born and lived I don't see Strawberry Spring mentioned anywhere.

You've gotten something wrong!
I your blog ,you've stated that George Hiller's manager quit..
this is wrong, because HIler told Steve ( the manager) "You're Fired" !
So HIler actually fired his manager, rather than Steve Hollis Quitting>
I know of this because I have Rock around the clock on vhs .