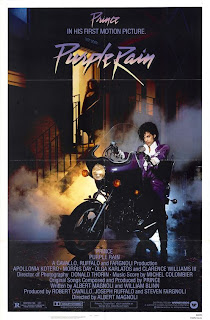 One of many astonishing things about Purple Rain is that, yes, Prince was pretty well known at the time - he'd made five albums and had a couple of pretty big hits, including Little Red Corvette and 1999 - but rather than simply cashing in on a star that had already reached the apex of his popularity (like most pop music movies) Purple Rain vaulted Prince into a realm of popularity and renown that even most best-selling popular musicians never reach.

How did this happen?

I hesitate to declare this movie a masterpiece, but it is the modern-day blueprint for a pop star movie vehicle. It does so many things right, and features so many great moments and songs and performances that to regard it as anything but the prototypical rock star movie would be to terribly undervalue it.

The Kid (played by Prince of course) has a band, The Revolution. They play every night at a Minneapolis club called First Avenue, but they have competition in the form of a stylish band called The Time, led by the egocentric Morris Day. Both bands fight over an audience, but the Revolution is falling behind, and the Kid's aloofness to both his band members and the club owner is not helping matters.

Maybe the Kid is distracted by his rough home life, where his father and mother oscillate between fistfights and lovefests. Though his father is abusive, the Kid obviously admires him, and sees reflections of himself. Unfortunately, his dad is a failed musician, sabotaged by his own desire for control.

Meanwhile, the mysterious, sexy, and cape-wearing Apollonia has arrived in town intent on becoming a star. The Kid notices her. So does Morris. Thus begins a battle for her heart, a battle to gain a following, and the discovery of a path to artistic transcendence.

From the very beginning of this film, you know you're in for a treat. As the Warner Bros. logo appears we hear a voice say "Ladies and Gentlemen, The Revolution…" and then the opening organ lick of Let's Go Crazy comes on and the ride begins!

The very first thing worthy of mention is the abundance of performance scenes, with the Revolution just kicking it on stage. This is what every rock star movie needs to have, and yet way too many cut corners out of fear that it will bore the audience. This is a legitimate concern. If the songs or performers aren't going to be able to pull it off, you've got to cut your losses. Purple Rain's advantage here is twofold:

1) The band was tight and visually interesting (I mean, what a strange band… you've got a guy who dresses like a doctor, a hot lesbian duo on keys and guitar, and an androgynous leader, all dressed in shiny variations of stripes and paisley, and they were inter-gender and inter-racial!). The show was choreographed, but didn't look it. My former boss is a lifelong Minneapolean and was around in the heyday of Prince. She had seen him at First Ave. soon before the movie came out and was very excited by the stage show…the way Prince moved and interacted with the Revolution. She claims that when she saw Purple Rain she was disappointed because it was all the same stuff. Frankly, I think she's a little nuts, in no way should familiarity diminish the greatness of the performances.

2) The songs had emotional resonance within the context of the film's events (it helped that Prince wrote the songs specifically for the movie). There are several examples of this. When Apollonia is courted by Morris in plain sight of the Kid, he leads the band into a gut-wrenching version of The Beautiful Ones that culminates with the line "Do you want him (point to Morris) or do you want me (points to self), 'cause I want you! (points to Apollonia)." You can tell by the look on the characters' faces that this isn't just a song, it's a message.

Speaking of that, there are a couple of moments where the reaction to the song is curious. For example, after Apollonia has decided to join Morris' girl group, and the Kid is pissed at her, he tries to get her goat by performing Darling Nikki replete with gyrations on top of the speakers. It works, and she storms out of the place. But why? Is she upset by the insinuation that the Kid has had sex with other women? Is she secretly conservative, like Tipper Gore?

Even given this misstep, the movie does very well with the songs, and that is a make-or-break proposition when it comes to a rock star movie. It wasn't until my third viewing of the movie that I noticed that in one of their fights, the Kid's father says "I would die for you" to the mother. Of course it shows up as a song…brilliant.

On the topic of sex: Purple Rain broke the barrier on it (and 8 Mile took to the bank). Previous rock star movies didn't have much to work with in terms of the sex, drugs, and foul language that are the trademarks of youthful rebellion. They were trying to achieve a rating that would allow the younger audience in, but to do so they had to sanitize and risk losing the very youth it wanted to attract. Purple Rain says "fuck it" (literally) and goes for the R rating with generous profanity and a couple of steamy, nudity-included sex scenes.

For the most part, the acting in this movie is very engaging, which is not always something you expect in a rock star movie. Prince is a good actor…that's evident here and in his other movies. You get the feeling that if his look wasn't so iconic (i.e. people wouldn't see him and immediately say "There's Prince"), he could have easily been a movie star for years. He shows flashes of the comedic ability that would blossom in Under the Cherry Moon (shown here when interacting with Apollonia in the Take Me With U scene and doing some ventriloquism before a show). But mostly he's brooding and serious.

So to take the edge and burden off, we've got Morris and Jerome, who are just damn funny, even as villains. I love that in the first glimpse we get of Morris he's vacuuming. And I know the "what is the password" scene is a ripoff of the classic Who's On First bit, but it still shows great comic timing. I also like that their relationship dynamic seems to be based on that of James Brown and the guy who keeps putting the cape back on him.

So there's the blueprint…we've got lots of great performances of songs that have resonance in the film itself, we've got sex and profanity, and we've got good acting. Other, smaller things help make this film the blueprint, but these are the ones that really matter.

How does the Kid afford his dope purple motorcycle? Sure he lives in his parents' basement and therefore doesn't pay rent, and he has a regular gig. But you'd think all of that money would go into clothes, equipment, paying the band members, etc. I guess its best just not to think about movie characters' finances.

How does the band play Purple Rain so flawlessly without any practice? Of course the Kid, Wendy, and Lisa all know it, but how are the others keeping up with the changes? Are they just that good? At any rate, this song is just a knockout, especially the way it's presented. The lyrics are meant to be regretful but redemptive, addressing his father. Even the performance of the song is healing, because it represents the sort of surrender of control that the Kid has been fighting against (Wendy and Lisa wrote the instrumental part and have presented it to the Kid, but he is resistant to material other than his; but you can tell he's haunted by the melody throughout the film, because he keeps playing the tape).

Is it just me, or does Baby I'm a Star feel tacked on? Of course Purple Rain is the emotional musical climax, and I Would Die 4 U has to be there to stoke the fire and end on an up note, but "baby, I'm a star"? No, you're not. Not yet. Prince is, but the Kid isn't, and the denouement doesn't need to be this long. It's almost as if they knew they needed one more song for the album, so they threw this in there.

The iconic final shot, with Prince frozen in triumph and the lights shining behind him, is another part of the blueprint. A shocking number of rock star movies attempt to duplicate this!

Why didn't Apollonia 6 become the new Supremes? This is a joke.

The theatrical trailer included on the no-frills DVD has no less than three moments that hint at deleted scenes. I'm intrigued by trailers, and love to imagine seeing this as a preview back in the day and wondering if I would have gotten hyped for it. Anyway, the scenes we see are 1) Morris being harassed by the cops as he talks to Billy the club owner, 2) the Kid's dad interrupting a rehearsal and the Kid punching him (!), and 3) Morris sneaking around the Kid's house. As exciting as this discovery is, I'm very torn when it comes to deleted scenes on DVDs. Certain movies have become so familiar that the idea of there being more that we haven't seen is like discovering additional chapters to the Bible, or a hidden room in the house you've lived in for 20 years. Just the thought that there are deleted scenes to The Karate Kid sends my head spinning because the film seems so perfect as is. But in the case of a movie like Say Anything, watching the deleted scenes felt sort of dirty, like I was never meant to see them. The only one in Purple Rain that might be of substance is the father visit, which I am clamoring to see. Come on Warner Bros., where's that collector's edition?!

The world of pop music movies would be much less interesting without Purple Rain.
Posted by Paul V. Allen at 11:51 AM

I thought that the third deleted scene that you have listed was of the kid breaking into an Appolonia reheasal, and punching Jellybean Johnson. In the brief second that I saw it, I thought I recongnized the interior of the rehearsal hall that Morris and the original two girls were in towards the beggining of the movie. I figured the scene was supposed to be used when they shot Prince pulling up outside of the building and see's Morris' car outside. I played it in my head that, the Kid got so upset that Appolonia was in there that he decides to try to bring her out. I may be completely wrong, but what the heck. I didn't understand the Darling Nikki run-out either. Great post!