Me and Mariah go back like babies and pacifiers 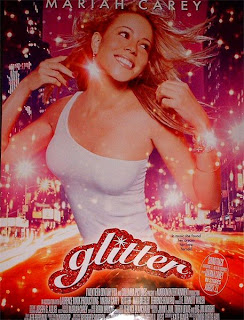 If Purple Rain showed us how to do it right, Mariah Carey's bomb Glitter is a clinical in how to screw everything up. This movie is spectacularly terrible, and I know because I've seen it twice! The first was voluntary (for this project) and the second was in a hotel when there was nothing else on. It would be much too easy to gleefully rip into this film, but I'd like to avoid that temptation. Okay, so I'll do a little ripping, but I'm going to use the platform to talk a bit of theory. First…

We start with a flashback wherein Mariah's mom is singing in a bar, and calls her young daughter up on stage to display some impressive pipes. You hope she learns that if she hangs out in smoky bars for much longer she'll sound more like Joe Cocker than Whitney Houston. This scene feels kind of like a VH1 Divas Live special. Oh, then we learn that her white father wants nothing to do with her.

Credits rolling around this point reveal Mariah as the "executive movie producer." This can mean nothing but trouble.

Mariah's mother gives her up, and she goes to an orphanage where she meets a sassy Hispanic friend AND a sassy black friend. Kudos to this movie for avoiding the temptation of having only one broad racial stereotype. Then, all of the sudden it's the early '80s and the three friends are hanging in a trendy club. They get involved with a guy who wants them to be back up singers for a (surprise!) bitchy Appolonia-esque woman who can't carry a tune. The producer takes Mariah's part, substitutes the vocals for the bitch. And you thought that kind of thing didn't start happening till the late '80s and early '90s (sorry Milli Vanilli and C & C Music Factory fans)!

The song becomes a hit, Mariah is discovered by a creepy, creepy DJ named Dice, and played by an actor who is honestly a poor man's version of Donnie Wahlberg. Not even Marky Mark. Donnie. He is apparently a musical genius and decides to mold Mariah's career. Also, they fall in love! Tommy Mottola, are you watching?

Under Dice's tutelage, Mariah gets sort of popular. We never really see how popular, but apparently enough for Dice to afford a diamond encrusted bling bling necklace spelling out his name (and you thought the Cash Money Millionaires came up with that one!) which he wears throughout the rest of the film. You get the idea that it cost a lot to make and the filmmakers wanted to get their money's worth.

Blah blah blah, they move in together, Mariah makes a video (get this, they want her to show clevage...Mariah would never do that!), the record company becomes dissatisfied with the dance direction of her music, so she is forced to drop Dice as a svengali. They stay together as a couple for awhile, but she gets even more popular (I think), and then they break up. Apparently in this time she gets so popular she can sell out Madison Square Garden, though the film shows no real evidence of this.

Meanwhile Dice is in trouble after consistently mishandling a money situation with Mariah's old producer. The producer kills him (more on that below). Mariah hears the news right before the MSG concert, goes out to perform anyway, and sings a song that has absolutely no emotional resonance at all. Then she goes and finds her mother somewhere in the suburban countryside. Roll credits.

Okay, here's the theory stuff I promised. First, I want to talk about formula. Glitter is odd in that rather than sticking to one formula, it dabbles in a couple without ever really committing. First you have the A Star Is Born formula, in which a woman with talent hooks up with a man who can get her places, she gets to those places, gets too big for her britches and he can't handle her fame, so they break up. Later she comes to her senses, they reconcile and she makes a triumphant return to public adoration. Second you have the Purple Rain formula, in which a mostly good character is pinballed around by outside forces before ultimately triumphing over them.

Glitter mostly sticks to the former formula, with a few unwelcome twists, but neglects to add the "too big for her britches" part, thus negating any impact of the conclusion. Mariah wanders through this film as though she's eternally mystified by everything that's happening. It's not that she's a bad actress as much as it's the fact that she doesn't even try.

There are also some disturbing similarities to the Britney Spears film Crossroads, including a "three friends and a flashback" beginning, and a scene wherein two romantically involved people write poetry and perform it at a piano.

The other bit of theory I'd like to discuss concerns character development. Given the ending of the film, I'm assuming we were supposed to like Dice as a character. FORGET IT! It's not only his poor acting (with a Brooklyn accent that comes and goes as it pleases) or his constant shirtlessness that cause annoyance. He is badly written, bottom line. In fact, at one hour and 17 minutes in, right after he and Mariah have attended some type of awards show (and he has already been removed as her producer), he bitches out Mariah and calls her friends slutty and fat respectively.

At some later point, in the scene that leads to his death, he beats the stuffing out of Mariah's former producer, and then goes to jail for it.

When the producer came back at the end of the film and shot Dice, I cheered. I actually CHEERED for the death of a character who wasn't supposed to be a villain! The movie gave the character zero redemptive quality and then asked us to feel sad when Mariah sings a song for him? NO WAY! Bad, bad character development.

There's this cat that appears sporadically in the movie, usually at points where Mariah is traumatically leaving. Other times we see no evidence of it. Watch for this!

Eric Benet (the former Mr. Halle Berry) also appears, but really is a pointless character. He plays a musician who Mariah works with after ditching Dice. It seems like he and Mariah will either fall in love, or he will double cross her. Neither happens.

Why wasn't there more focus on the music? There are several Mariah songs in this film but never are they brought front and center. Oh, except right after Mariah and Dice have sex for the first time a Mariah song plays over the pillow talk. Is it me, or is that creepy?

Besides Mariah's music, The Message is played about 5 times in this movie. So at least Grandmaster Flash and the Furious Five made some money off of this thing; in the face of such hideousness, you MUST find a bright side.
Posted by Paul V. Allen at 3:10 PM