"A manufactured image, with no philosophies..." 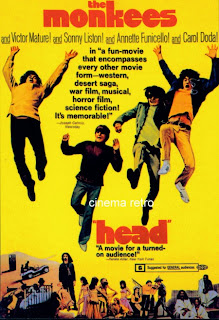 The Monkees may well be to blame for my obsession with popular music. When they made their 1987 comeback and the old episodes started showing up on TV, they quickly became a favorite. That summer I spent the longest two weeks of my life visiting my grandparents in Kentucky and, to allevieate my homesickness, my step-dad sent me a tape: Then And Now...The Best Of The Monkees. It got my undivided attention.

When I got a CD player the first thing I sought out were Monkees CDs. I was in luck, because Rhino was on the forefront of the reissue game, and they'd released all 10 of the Monkees' albums with "restored original artwork and bonus tracks." I bought all of them. There were the albums with the hits on them, of course, but among a few curiousities cheif was a CD with a plain silver cover and the name Head. It advertised itself as the soundtrack to the film, a film that I didn't even know existed. How could the Monkees have made a movie without me knowing?

Well, because it was a flop. But, it shouldn't have been!

The Monkees got an unfair rap. To the rock and roll hipsters they were the Prefab Four, a cynical commercial unit with no artistic merit, only designed to sell records and merchandise to teen girls. There is some merit to this, afterall the group did advertise clothing for JC Penny. The band weren't picked with music in mind. Sure, Mike and Peter were actual performers and songwriters, and Mickey and Davy could sing, but they were actors first. The untruth about the Monkees is that they they were fakes. Yes, they came together in an artificial way, and they had a powerful corporate machine behind them, but in they end, they were still a band. In their short initial career, they sporadically did things that all bands do: They performed live, composed some of their own material, and recorded music as a self-contained unit.

In a time so concerned with authenticity, the boys themselves were painfully aware of their image. Head, believe it or not, was an attempt to change that image.

Helmed by first-time director Bob Rafelson (who would later do Five Easy Pieces and The Postman Always Rings Twice) and co-written by Jack Nicholson (yes, THAT Jack Nicholson) Head is a very stream-of-consciousness, very meta film. There is no plot to speak of, only a series of vaguely connected vignettes and musical numbers. That's not to say there aren't recurring themes. Appropriately, the film is majorly concerned with overcoming the fake and commercial aspects of life, more specifically the Monkees' status as manufactured teen idols. The way to do this? Make a really hip film, and have the boys admit they're fakes.

Imagine yourself as a teenage Monkees fan coming into the theater, excited to see your idols on the big screen and expecting the rolling-a-bed-through-the-streets-while-catchy-music-plays Marx Brothers style comedy of the TV show. Instead what you see is a highly esoteric, impressionistic work of art filled with songs you don't know.

Now you can see why this movie tanked so badly at the theaters. Expectations are one thing, but remove those and what you have is a highly enjoyable film.

We start with the dedication and opening of a suspension arch bridge. When the mayor is about to cut the ribbon, Mickey comes crashing through like a runner winning a race, and then promptly takes a dive off the side of the bridge. While he's in the water, Porpoise Song (Theme From Head) strikes up and the colors turn psychedelic and some mermaids show up. The song itself is a minor classic filled with nonsensical lyrics ("an overdub has no choice / it cannot rejoice"). The biggest surprise is it was written by Goffin and King, the team responsible for some of the group's poppiest hits. Sgt.Pepper obviously had a huge influence.

This transitions into a scene where a hot girl is taking turns making out with all of the boys. She saves Davy for last and of course that kiss sets off harps and doves. It's sort of a dig at his poster boy image, and the first sign that the Monkees have become self-aware. This becomes very obvious in the next sequence, where we see the boys in the trenches of war. They are preparing for a raid, which promptly turns into them running onto stage for a concert. Of course there's a commentary on the Vietnam war there, as well as an insider's look at how it feels to be the objects of so much fervor. The boys play Circle Sky, a rare de-countrified Mike Nesmith composition, and the performance is interspersed with screaming audience reaction and actual scenes of people in horrible situations. It's obvious but effective social commentary. When the band finishes the song, they're literally ripped apart by the audience.

From there the movie just snowballs, through a funny fake Coke commercial set in the desert, to a belly-dancing sequence, to western, boxing, and party scenes. Throughout, people step in and out of character, walk off sets, or have existential crises. Men turn out to be women, maharishis turn out to be liars, cops dance, Mike denouces Christmas and birthdays, huge eyeballs appear in medicine cabinets, etc.

The music shuffles things along but there's not a single classic song. As We Go Along is an introspective number accompanied by scenes of the boys walking though snow-convered mountains and flower-filled fields, and to me is reminiscent of those old Sesame Street song sequences about nature or lonliness.

As the film winds down the boys engage in a manic chase through the film's sets and end up right back where they started, in the water. And as the film ends we realize the water was not a river or ocean, but a tank in which they were trapped.

Teri Garr, Victor Mature ('60s B-movie actor), Annette Funicello, and Frank Zappa all make appearances. The latter gets the best lines. After Davy's performance of the vaudeville-esque number Daddy's Song (with choreography by Toni Basil!), Zappa tells him: "That song was pretty white, man." He goes on to say that Davy obviously spends more time on his dancing than his music, and should probably reverse that.

My senior year of college a friend and I wrote and directed our own short film. It was called Put On Your Dancing Pants. Not long before we started production, we watched Head, and little did we know how much influence it would have. The movie we made incorporated several elements of Head, including a dream sequence, flashing words on the screen, interviews, and a general sense of surrealism.

The dialogue is rather sparse, but what is said is usually funny or quotably weird, such as "Nobody ever lends money to a man with a sense of humor" and "I believe he's in the john, I mean, comfort room."

There were really two possible outcomes regarding the release of this film. The first possibility was that Monkees' fans, critics, and haters all embraced the film for its artistic merit and self-awareness and the Monkess thus lost their square image. The second possibility, the one that actually happened, was that the band was effectively killed. They limped on for another year without Peter Tork and then called it quits.

That's a shame really. Overall, this movie manages to be wonderfully weird without crossing the line to offputtingly weird, and it does so admirably. You'd never see a major label recording act make a movie this cool and out-there today. Never.
Posted by Paul V. Allen at 6:07 PM

Davy Jones not "musically inclined"??? How DARE you!

Indeed, he had pre-Monk fame as the Artful Dodger in the musical Oliver (both London & NY). He even ironically performed on the same Ed Sullivan that featured the Beatles in their first appearance.

That wasn't the best choice of words on my part. I should edit it to say: "Did not play an instrument or write songs."