Keep it locked up 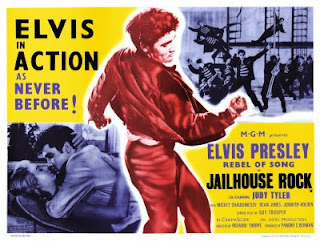 In terms of numbers, Elvis Presley has a film career unmatched by any other recording star. And as we know, quantity ALWAYS means quality. And Jailhouse Rock is considered the cream of the crop.

It might be helpful to keep in mind that when this film was released, Elvis was already a huge star with several number one hits to his name.

Elvis plays Vince Everett, a thuggish feller who's sent to jail for beating a man to death. Here, he's considered a "hooligan" and ends up in a cell with Colonel Tom Parker, I mean Honk, a musically-inclined old man. Honk likes to play gospel songs on his guitar to soothe the souls of the other inmates. When he learns that Vince has musical talent he nurtures it, teaching Vince everything he knows.

He even arranges to get Vince on T.V. and it results in mountains of fan mail (including a disturbing letter from a 15-year-old girl wherein she gives her measurements).

After 14 months, he gets out of prison and is determined to become a star. He meets a record company employee named Peg who helps him on his road to fame. The film follows him through the traditional arc of struggling-for-fame, achieving it, getting too big for his britches, and then realizing the error of his ways.

I had problems with this movie. The main one is that Elvis' character is not likable at all. He goes to prison because he gets into a melee with a pimp and can't control his anger while beating him up. Since this is the case, then you hope for the movie to offer the character some redemption. It does, but not enough. In fact there's one small redemptive moment compared to roughly 8 horrible ones. Here are some of them:

Afer his star-making turn as in the televised prison talent show (!) he stupidly involves himself in a prison riot and gets more time added to his sentence.

On his road to fame he's petulant. There's a scene in which he sings "Young And Beautiful" in a club and the patrons could care less. In frustration, Vince smashes his guitar in the face of a particularly chatty patron. Yeah, that's the way to build a fanbase.

When Honk gets out of prison, looking for a piece of Vince's career, Vince cold-bloodedly cuts him off.

Later, he slaps up a record executive who steals the arrangement idea for one of his songs.

His relationship with Peg is also maddening...they are very hot and cold. At first she seems to despise him but he digs her. Then she starts to like him and he responds by treating her like shit. They flip back and forth for the entire film. It's like Ben and Felicity all over again. It does inspire a curious scene where she tries to include him in her group of friends, but he gets very angry about their discussion of jazz (he thinks it's too high-minded) and storms away after insulting a party-goer. She storms after him to give him the business and he responds by kissing her. Of course she melts, but she does offer weak protestations about his romantic "tactics." He responds: "They ain't tactics honey...it's just the beast in me."

As for the twists and turns of the plot, they aren't really interesting. Peg and Honk both come to think fame has given him a big head (though it was pretty big before) and is not thankful enough for the work they did to get him where he is. This leads to the climactic scene where Vince and Honk get into a fight and Honk punches him straight in the windpipe, thus taking away his voice. Given how much of a jackass Elvis is in the movie, it's kind of a satisfying moment.

(By the way, he gets his voice back for the final scene).

When Elvis reveals his musical talent to Honk, he sings a song about being kissed tenderly. To me, this doesn't seem like the wisest idea... to sing a love ballad to your new cellmate.

Why isn't the music a strong point in the film? There's only one genuinely electrifying song / performance, and that's the title track. Though his dancing is great, he barely even tries to mask the fact that he's lip-synching. Other songs, such as Treat Me Nice, Young And Beautiful,
Don't Leave Me Now, etc. barely qualify as rock 'n' roll. Mostly they're just boring, and even a young fan's insistence that a performance of (You're So Square) Baby I Don't Care is "really gonesville" doesn't convince me.

There's a baffling moment wherein a radio DJ (who's about to play Vince's new song) reads a dog food commercial that touts its use of horse meat. I can't even venture an explanation as to why this was given precious film time.

I've mentioned one, but there are actually two scenes where a woman dislikes / is mad at Elivs and his solution is to force her to kiss him. Both times they give in immediately. Are we to believe this is because he was such an awesome kisser? Or is this truly the only method of dealing with women who despise you? If it's the latter, then I've been approaching things all wrong.

If this is the cream of the crop that is Elvis' film output, I'm certainly not going to spend any of my time on the rest of the harvest.
Posted by Paul V. Allen at 3:50 PM