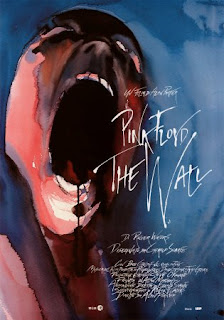 Apparently seeing a need to complete the trifecta of terrible dialogue-free film depictions of popular albums (the first two being Sgt.Pepper's Lonely Hearts Club Band and Tommy), a group of talented people got together and made this movie of Pink Floyd's 1979 concept album The Wall. And though The Wall is the best of the three, that's not much of a compliment. It's like being the nicest mass murderer on death row.

Interestingly, it effectively killed the genre, just as music video was on the rise.

Admittedly, I went into this film at a double disadvantage. One, I don't really like The Wall as an album. And two, I wasn't stoned or tripping.

Bob Geldof (he of The Boomtown Rats and Live Aid) plays Pink Floyd, a burned out rock star haunted by his smothering mother, dead father, terrible school experience, and divorce. He's sitting in a hotel room, decaying, and having disturbing flashbacks and visions and nightmares, all set to the tunes of Pink Floyd the band. According to the documentaries on the DVD this story was autobiographical, based on the life of Pink Floyd's singer / songwriter Roger Waters (with a little bit of off-his-rocker early member Syd Barrett thrown in for good measure).

For a vast majority of the movie (especially the parts about Pink's father and his marriage and divorce) it seems like we're watching a preview of an existing film. You know, snippets of the film's best scenes set to music. I guess that's sort of a compliment.

The non-narrative parts of the movie are its weakness (but, again, I was not chemically altered). There are three major animation sequences by cartoonist Gerald Scarfe and they feature a large mechanical bird and a large talking butt, among other things.

There are two majorly disturbing sequences. In one, Pink is shaving and then something snaps and he decides to cut his nipples and shear his eyebrows (Waters says this was a Syd Barrett moment). It's almost impossible to watch. Soon after, the film turns into some sort of fascist rock star fantasy. Pink is no longer a musician but a neo-Nazi dictator. He speaks at a rally and incites several skinhead and folks in black Klu Klux Klan gear to hate others. I guess it's a commentary on the power of the rock star, or something.

Though The Wall is not one of my fave albums, there are some great songs. Here's what we're visually subjected to when we hear those songs in the movie:

Another Brick In The Wall, Pt. 2 - School kids are marching in unison, wearing grotesque masks. Then they are sent into a meat grinder and turned into sausages. But somehow they get it together enough to riot and destroy the school. As a teacher, I disapprove of this scene, and believe everyone involved needs to reconsider their choices.

Young Lust - Pink brings a groupie back to his hotel room and instead of doing the same old thing he decides to ignore her in favor of the T.V. until he gets a notion to destroy his hotel room. If I were to trash a hotel room, I think I'd wait until just before check out, because otherwise, where are you going to sleep?

Comfortably Numb - Pink recalls the time he found a wounded rat in a field. He brought it back to his mother and she freaked out so he took it to the shed and attempted to care for it. But it died anyway and he dropped it in the river. Not a bad scene, but also not entirely appropriate for the best song on the album.

Run Like Hell - More rioting and violence, and the kids with the masks return. At this point I began to calculate what percentage of the 96 minute film features folks destroying things. It came out to roughly 26.2.

When the band's manager (Bob Hoskins cameo!) comes to rescue Pink, the hotel manager is played by none other than...the guy who played the hotel manager in Ghostbusters. ("$2000 dollars? That's ridiculous; I won't pay it.") I wonder if he just took out ads in the trades saying: Need a snooty hotel manager for your film? Look no further.

This film's director is the only one to appear twice in the Baby, I'm A Star project. Alan Parker also did The Commitments, and his resume is quite interesting, including Fame, Birdy, Evita, and The Life Of David Gale.

I know The Wall has become somewhat of a cult film and is still seen in Saturday midnight showings and in dorm rooms across the country, and I respect it for that. And unlike its partners in crime (Sgt.Pepper and Tommy) its story is at least mostly discernible. But I still don't ever care to see it again, voluntarily.
Posted by Paul V. Allen at 8:20 AM