Yank off the knob 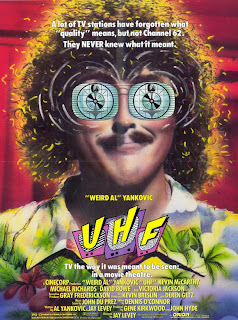 Okay, confession time. I wasn't always the well-informed, music-savvy person you see before you. As a youth I quite enjoyed listening to the radio, or my mom's tapes and records, but I had very little knowledge of pop music past or present. In fact, the only tapes I bought myself and listened to on a consistent basis were by "Weird Al" Yankovic.

While I remember being intrigued by his 1984 parody of Beat It (Eat It), I really got into him because of his 1988 Even Worse album. I was 11 years old and the perfect age to really appreciate the concept of wacky humor. And songs like Fat (a parody of Michael Jackson's Bad), (This Song's Just) Six Words Long (a parody of George Harrison's Got My Mind Set On You), and Lasagna (a parody of La Bamba) were perfect for that. But other songs on the album referenced Oingo Boingo, The Beastie Boys, Tiffany, and Peter Gabriel, all of whom I was just barely aware of.

So yes, for several songs, I knew Weird Al's parodies before I knew the originals. There's something definitely off about that, I know.

As would become my M.O. I got obsessed with Al and quickly filled in his back catalog. This only complicated my musical life, as parodies, "stylistic parodies" (parodies of an artist's sound, not a specific song), and polka medleys of current hits by artists like Devo, The Kinks, Queen, The Clash, Talking Heads, James Brown, El Debarge, and The B-52's were ingrained into my young consciousness. In fact, you might have a pretty good case if you argued that Weird Al is to thank for my eclectic tastes. I remained devoted to Al through high school (he was my first voluntary concert), but the joke began to wear a bit thin by college.

Anyway, this is all to say that I was very interested in a "Weird Al" Yankovic film. On paper, this is a great idea. His videos had always been quite imaginative and funny, if a bit sophomoric, and in theory his sense of humor would translate well to the screen.

That turned out to only be partly the case.

Al plays George Newman, an imaginative fellow that can't hold a job because he is so prone to daydreaming and forgetfulness. When he lucks into running a small UHF station his rich uncle won in a poker game, George's talent starts to shine. Thanks to some truly wacky programming, the station catches on with the public, much to the dismay of channel six owner R.J. Fletcher. When Fletcher tries to get control of U62, George must find a way to save the station.

The film starts out promising, with a funny parody of the opening sequence of Raiders Of The Lost Ark. The statue he's after is an Oscar. From there the movie attempts to blend a sort of down-to-earth plotline with Airplane-style gags. It's a very difficult balance to maintain, and the film fails more often than not. Gags like Conan The Librarian, Ghandi II ("No More Mr. Passive Resistance"), Spatula City, etc are funny but end up making the rest of the film, the real storyline, seem all the more pedestrian.

Perhaps the problem is a lack of focus on the music. The soundtrack to the film featured several funny parodies such as Isle Thing (marrying Tone Loc and Gilligan's Island), She Drives Like Crazy (Fine Young Cannibals parody), Spam (parodying R.E.M.'s Stand), a Rolling Stones polka medley (Hot Rocks Polka), and the epic The Biggest Ball Of Twine In Minnesota, which, seriously, may be Yankovic's greatest accomplishment as a songwriter. But these are all ignored in the film. The only true musical moment in the movie is George's daydream combining a Beverly Hillbillies rerun with the song Money For Nothing by Dire Straits (Fun Fact: Mark Knopfler played guitar on the parody).

In fact, it's no stretch to say that the video for the song UHF (another great Al original) is a better filmic accomplishment than the movie itself. Interspersed with clips from the movie are parodies of famous videos by George Michael, Guns 'N' Roses, Talking Heads, Peter Gabriel, Robert Palmer, Prince, ZZ Top, Billy Idol, and The Beatles. It's brilliantly done.

The cast is fairly talented. George's mostly loyal girlfriend is played by Saturday Night Live's Victoria Jackson. The station's janitor Stanley Spadowski (who becomes a star when he has to fill in as a kid's show host) is played by Michael Richards, who later ascended to fame as Kramer on Seinfeld. Long Duck Dong also has a small role, as does The Nanny. Kevin McCarthy plays the villain Fletcher and hams it up just like he did when he played the villain in Innerspace.

The funniest moment of the film is a brief bit featuring two old men sitting on a bench. One is blind and he's trying to do a Rubik's Cube. After each turn he asks his companion if he's got it yet and the companion keeps saying "Nope!"

So many movies feature plucky underdogs attempting to save a local institution by earning a certain amount of money. Many cliches are true, but how come I've never actually come across this situation in real life? Does it ever actually happen?

Is it coincidence that a film that features Kramer as one of the main stars also features a character with the last name of Newman? Yeah, probably.

Most devoted "Weird Al" fans will tell you (if you're brave enough to engage them in conversation) that the quality of Al's records come from his original compositions and polka reinterpretations, and the parodies are just for chuckles. In this movie, the opposite is strangely true. The parodies are the funniest parts, with the rest seeming slightly flat in comparison.
Posted by Paul V. Allen at 1:50 PM

lennymartinez4837 said...
This comment has been removed by a blog administrator.
3:18 PM

Anonymous said...
This comment has been removed by a blog administrator.
4:01 PM