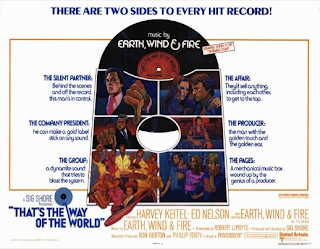 Once upon a time a man named Sig Shore thought that he'd put two of the '70s most interesting stars together and make a movie with them. One of those talents was the R & B group Earth, Wind & Fire. The other was tiny dynamo Harvey Keitel.

Harvey Plays Coleman Buckmaster, a record producer whose father was a famous jazz pianist. His pet project on the Acorn label is The Group, an R & B band with approximately 27 members (played by Earth, Wind & Fire, natch). His boss, who probably doesn't even own a stereo, wants him to turn his focus to The Pages, a family act with a wholesome, safe, antiquated sound. Coleman is resistant, until he falls into a relationship with Velour Page, the comely star of his new group. With his artistic integrity, his job and his heart at stake, what will he do?

This movie has an interesting thematic struggle. How do people who make records operate within a structure where creativity is supposed to be marketed and sold? We are shown the seedy side of the business, from the greasy palms that need to be greased even more to the pay-for-play structure that still exists today to the short-sighted need to capitalize on whatever is popular at the moment.

Harvey and The Group are meant to represent the good and wholesome creative side, while the label manager, The Pages and the mob boss financier (who looks like the love child of Marlon Brando and Abe Vigoda) are obviously the soulless greedy types.

The problem is the films events and characterizations don't make that clear enough and in the end actually end up flipping them somewhat.

Yes, the label manager is a grade A jackass. When he tells Coleman that The Pages will be the group of the future he says, "People on the streets are tired of junkies and fag acts." And, yes, The Pages are a mess. The father is a sleazier version of Jerry Lewis and the son is an entitled junkie, who wears a shirt with a parody of the Coca-Cola logo that instead says, "Enjoy Cocaine." At least he follows the dictums put forth by his own wardrobe.

But Coleman is impossible to pin down the entire film. Perhaps this is because Harvey Keitel only employs one facial expression: impassive. His character is meant, I think, to be soulful and dedicated. He wears a muscle shirt with what seems like a built-in manziere. He drives a red and white British roadster. He approaches the mixing console as if it were a canvas with a half-finished masterpiece. But there's never a clear idea what he's thinking or feeling. Some examples:

- The Group, supposedly his baby, the band he has nurtured along and believes will be able to make a genuine musical connection with, have their song "Shining Star" played on the radio. When Coleman hears it he doesn't even crack a smile or turn the volume up. He could be pissed, happy, bored, baffled or drunk. We don't know.

- He has a vaguely British girlfriend who he seems to like, but once Velour comes into the picture, he drops her like a hot potato. In the scene where she discovers Velour in his apartment in her underwear and reams him out, Harvey acts like the cameras haven't started rolling yet.

- Similarly, when The Group come to tell him they're done waiting for him to finish dicking around with The Pages, he seems as though he could care less.

Speaking of that scene, it is one of two (TWO!) in which any of the Earth, Wind & Fire band members even have lines. Otherwise the only time we see them is when they are recording in the studio, playing at a roller disco and performing in the final scene. Dear Mr. Shore, if you are going to set up this band as your heroes, for God's sake make us care about them! What's worse is that there are only three Earth, Wind & Fire songs used throughout the whole movie!

The Pages have a sound that is somewhere between The Partridge Family and The Starland Vocal Band, but more bland. The scene where Coleman builds the song in the studio is pretty impressive, though I'd like to have an actual recording engineer verify for me that the knob-moving on the soundboard is accurate. Anyway, Coleman makes their song sound pretty good, even though he has already stated that "you can't make chicken salad out of chicken shit." Well, you could but it wouldn't taste very good.

The romance between Velour and Coleman seems to be the one genuine thing in the movie. At first he is justifiably wary of her and her opportunistic ways. But they do form a connection, especially when she reveals to him that Page isn't her real father, but in fact a boyfriend of her mother who molested Velour as a child. This begs the question, why did she decide to form a musical group with him?

At any rate, when she asks him to marry her and be her exclusive producer it does seem a bit sudden, but we have no indication that she is being manipulative.

So in the climatic scene, when Coleman reveals that he faked the marriage and now owns her contract, which he wants to trade to Acorn for his own and that of The Group, we are thrown for a loop. She asks him, seeming truly hurt, "How could you do this to me?"

He answers, "That's the way of the world."

At this point the film ends, with Coleman seeming triumphant (I guess it could also be gas judging by Harvey's face) while The Group plays over the credits.

The conclusion that the film reaches then, is seemingly this: The only way to preserve your artistic integrity is to fake an entire romance and break a psychologically-scarred girl's heart.

Maybe the reason The Group don't have the full support of the record label is that they have the worst band name this side of Limp Bizkit.

Coleman catches Velour's fancy and after an evening at the aforementioned roller disco (a scene which goes on approximately 90 minutes longer than it should) she seduces him. She does so by creating a makeshift Statue Of Liberty costume and saying, "You can take any liberty you want with me." I swear to God this happened!

Speaking of her, according to the Internet Movie Database, this is Cynthia Bostick's ONLY movie. And her only other work was a two year stint on a short-lived '70s TV show. This is baffling, because she's cute and she can act.

Near the end of the film there's a scene of a car moving through some streets. On a billboard off to the left we see a Billboard advertising Earth, Wind & Fire. WTF?

Often movies can be judged on whether or not they achieved their intent. Did a horror movie scare you, did a comedy make you laugh, etc. With this movie, I fully believe the intent was for us to cheer when Coleman beat the man at his own game. In that goal, the movie failed. Now if the intent was to make me feel sick to my stomach, well then, mission accomplished.
Posted by Paul V. Allen at 10:12 AM

606wge said...
This comment has been removed by a blog administrator.
4:09 AM

wnc6om47mn said...
This comment has been removed by a blog administrator.
3:17 AM