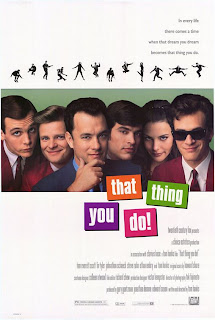 Ladies and gentlemen, the Oh-nee-ders!

When one thinks of Tom Hanks, one doesn't necessarily think of music (except maybe the big piano scene with Robert Loggia in Big), and yet he's responsible for one of the most unabashed love letters to pop ever put to celluloid. That Thing You Do!, which came out right in the middle of the Tom-Hanks-can-do-no-wrong era (back-to-back-Oscars and Toy Story before, Saving Private Ryan after) appears to have been a very personal project for Hanks. He wrote (both the screenplay and several of the film's songs), directed, and starred.

Guy Patterson (Tom Everett Scott) works in his dad's appliance store in Erie, Pennsylvania, and he loves music. In fact, when the store closes, he puts jazz records on the hi-fi and plays along on his drum set. Meanwhile an local band comprised of singer/guitarist Jimmy (Johnathon Schaech), lead guitarist Lenny (Steve Zahn), a bassist whom the film never gives a name (Ethan Embry), and drummer Chad (Giovanni Ribisi) are preparing for a talent show. They've got a ballad called That Thing You Do (we have a title!) which they think can win them the prize money. But Chad breaks his arm the day of the show, and...you see where this is going right? Guy agrees to sit in (but only if the boys will buy record needles and a radio from him).

The band (having decided to call themselves The Oneders) wins the talent show, mostly thanks to Guy's last-minute decision to speed up the tempo and change That Thing You Do from a ballad into a rocker. They also win a gig at a local night club/Italian restaurant out by the airport. Things snowball, as things will, and the band gains a strong local fanbase, records That Thing You Do in a church, and comes to the attention of Phil Horace (Chris Ellis), a man who lives in a camper. He offers to manage the band.

Phil gets the Oneders on the radio and a gig in Pittsburgh as part of a larger revue. This bring them to the attention of one Mr.White (Tom Hanks), a Play-Tone Records representative. He signs the band, gets them matching suits, changes the spelling of their name (to The Wonders), and puts them on his Playtone revue, which is traveling across the country playing state fairs. The band continues to gain fame and fans while That Thing You Do rises in the charts, eventually leading them to Hollywood.

There, the band appears in a movie, makes a TV appearance, and prepares to record new songs. But fate has different plans for them...

That Thing You Do! is a fine example of the rare-but-rich category of pop music film, the fake band. The Wonders are partly a Beatles analogue, especially in certain details of their story, but Hanks does a good job of giving the Wonders their own unique sensibility. The Wonders are not like the Beatles in individual personality, band dynamics, or career path.This is the tightrope that every fictional pop music film must walk. They have to blaze their own trail while still seeming truthful. That Thing You Do! does that.

Much like The Commitments, That Thing You Do! eschews the typical A Star Is Born story arc (musician starts out struggling, reaches the heights of fame, becomes too big for his/her/their britches, remembers his/her/their roots, and stages a minor comeback). Instead, it's just the first act. The band starts out, reaches fame, and then breaks up. The one-hit Wonders. Get it? The movie actually foreshadows this when Guy meets his jazz drumming idol Del Paxon (Bill Cobbs). Del says, "Ain't no way to keep a band together. Bands come and go."

Though the film is fictional, I picked up some Interweb chatter that the Wonders' story is actually loosely based on an Erie, Pennsylvania band called The Fabulous Epics, who formed in 1962 and later changed their name to Orange Colored Sky. They had some minor success (appearing in Don Knotts film, playing Vegas, and opening for Burt Bacharach and Frank Sinatra) and still perform today. However, all of this information came from their website, with no other source to verify. I couldn't find anything where Hanks himself admitted that this was his source material. So take it with a grain of salt, sugar, or pepper.

At any rate, Hanks and company have great fun conjuring up the musical spirit of the times, especially in the Play-Tone Galaxy of Stars. In addition to the Wonders, there's crooner Freddie Fredrickson, a Supremes-pattered girl group called the Chantrellines, and a Dusty Springfieldish singer named Diane Dane. Each has their own signature song, Mr.Downtown, When You Hold My Hand You Hold My Heart, and My World Is Over, respectively. In an endearing way, the Wonders don't know how to appropriately interact with these stars, and there are a few scenes to that effect.

Anyone who's seen Tom Hanks being interviewed knows he's a naturally witty guy. But it's something else entirely to put that into a film script and translate it to the screen. From the running gag that has everyone mispronouncing the band's name because of the spelling (every one says oh-nee-ders), to nearly every line that comes out of Steve Zahn's mouth (my favorite is when they're filming the beach movie and he reminds Jimmy: "You see, we're not the Wonders right now. We're Cap'n Geech and the Shrimp Shack Shooters") , this is a funny movie that's not a comedy. Those are rare.

The only true fault of the film is the rushed ending. Apparently there's a director's cut that adds several character development moments, which would make sense. Two things are sort of subtly built up and then abruptly jump to full-blown conclusions. One is Jimmy's artistic dissatisfaction within the band, the other is the relationship between Faye (Liv Tyler) and Guy. On the first one, it makes sense that a songwriter would be raring to get more material on record, and to avoid what he sees as extraneous, so when Jimmy complains about that, it seems natural. But when he becomes an all-out asshole (he breaks up with Faye and quits the band, each after one argument) in the film's final 20 minutes, it doesn't seem to flow exactly. As for the love story between Faye and Guy, I don't have a problem with the fact of them together, it's just how quickly it happens that bothers me. It makes sense within the flow of the story because it's obvious there's an attraction between them for the entire film. But the admission of mutual attraction/first kiss/first sex happens in one scene!

The ending is done Fast Times at Ridgemont High style, where we find out the fates of each character. The only one to truly make it in the music business is Jimmy, which is a slap in the face of karma, but is probably realistic. He had the drive and the talent and the ruthlessness to survive.

Here's a list of the band names the group brainstorms early in the movie before settling on the Oneders: The Echoes, The Band You're About To Hear, The Corvettes, The Chord-vettes, The Tempos, and The Heardsmen (which is actually the band Jimmy later becomes famous with).

I think this movie has one of the best "band hears itself on the radio" moments ever. That has become a cliche moment in all pop music movies, but Hanks has the group all listening to different radios and when the song comes on, they run to find one another and like a domino effect soon they're all listening together in Guy's father's store, and just basically going apeshit.

A lot rested on the quality of the film's title song, considering that it's played at least 582 times throughout the movie. That it doesn't become tiresome is a testament to the song. The movie studio apparently held a songwriting contest to find the tune, and Fountains of Wayne bassist Adam Schlesinger (whose band was just starting out; their debut came out the same year as the film) entered on a lark and won. Mike Viola, of the Candy Butchers, sang the lead.

Though the actors in the band don't actually perform any of the recorded or live material, they did rehearse together extensively to make it look convincing.

You might notice that Liv Tyler, as Faye, plays a sort of groupie, getting together with two members of the band and following them around on tour. This is fitting considering that Liv Tyler herself is the product of a relationship between a rock star (Steven Tyler of Aerosmith) and a groupie (Bebe Buell (who also had relationships with Todd Rundgrenand Elvis Costello, among others).

Charlize Theron plays Guy's self-involved girlfriend. Her name is Tina. Thus, when she meets Liv Tyler's character, it results in the following exchange: "Tina, this is Faye." Put them together and you have a bespectacled comedienne.

Tom Everett Scott looks like a young Tom Hanks, and Hanks realized and was uncomfortable with this. Apparently his wife convinced him to go ahead and cast Scott anyway.

Hanks called in some favors for this one. Look for Chris Isaak (as Guy's Uncle Bob), Alex Rocco (a veteran TV actor and Moe Greene in The Godfather) as the head of Play-Tone, Clint Howard (Ron's brother, and king of cameo appearances) as a DJ, Gedde Watanabe (Long Duck Dong, of course) as a hotel clerk, Jonathan Demme (director of Stop Making Sense, Silence of the Lambs, etc) as the director of the beach film, Weekend at Party Pier, Paul Feig (co-creator of Freaks and Geeks) as a DJ), Rita Wilson (Hanks' wife) as a waitress, Kevin Pollack as an emcee, Brian Krantz (Malcom in the Middle, Breaking Bad) as an astronaut, and Peter Scolari (Bosom Buddies reunion!) as a TV host. Whew!

In the director's cut of the film, it's revealed that Hanks' Mr.White is actually gay, just like Beatles manager Brian Epstein.

Most obscure reference in the film? Guy's remark that, "If Jimmy's a genius, I'm U Thant" (it sounds like he's saying "ooo-tantay"). U Thant was a Burmese diplomat who served as Secretary General of the United Nations in the '60s.

Despite some narrative flaws, That Thing You Do! is an enjoyable film experience. Anyone with a slight bit of nostalgia for '60s pop will find a lot to like. I myself was inspired to seek out the soundtrack. That's the ultimate quality test of a pop music movie.
Posted by Paul V. Allen at 3:49 AM

I absolutely LOVE this movie so much! It's a great movie and worth the watch. If you like serendipitous films (NOT pop flims that have this terrible cliche ending) definitely watch it!

Does Tom Hanks have a Pennsylvania family history?
The Wonders originating from Erie, PA. and his role as a U.S. Army Infantry Captain from Pennsylvania.