Act your age, not your shoe size 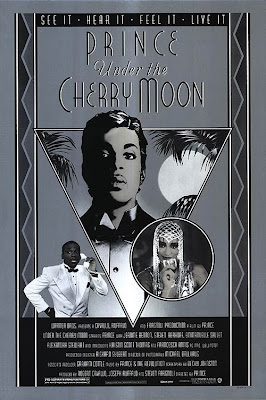 I first saw Prince's second movie, Under the Cherry Moon, as a rental, and I thought it was just okay. Then I attended a midnight screening of the film at the Uptown Theater in Minneapolis, and my opinion completely changed. For those of you that don't know, Minneapolis is Prince's hometown, and his fans there are unparalleled in their dedication.

That's not to say the crowd was big. I don't even recall there being a line. But those that were there, decked out in Prince gear (I saw one woman in a floor length leather coat with the glyph symbol covering her entire back), were ready to have a good time. And they did, laughing lustily at every joke, catcalling during the sex scenes, singing along to the songs, and reciting favorite lines.

It colored my view of the movie, which is far from perfect, and gave it a rosy glow. Afterall, any film that could inspire such devotion must have done something right.

Prince (who also directed) plays Christopher Tracy, a Floridian who has moved to Nice, France to play piano at a supper club and seduce rich women in exchange for financial benefits. His partner in crime is Tricky (Jerome Benton, member of the Time, and Morris Day's sidekick in Purple Rain). As the film opens, Christopher and Tricky have spotted their latest target, a widow named Mrs.Wellington (Francesca Annis, aka Lady Jessica in Dune).

In the meantime, a bigger target emerges in the form of Mary Sharon (Kristin Scott Thomas in her film debut), the daughter of a rich shipping magnate. With Mrs.Wellington in tow, Tricky and Christopher crash Mary's 21st birthday party. Both find her fascinating. She comes out to the party naked and asks the partygoers, "How do you like my birthday suit?" and then proceeds to sit in on drums with the band. Though she finds his lifestyle abhorrent, Mary finds herself equally fascinated by Christopher.

The trio begin spending lots of time together, much to the chagrin of her powerful, humorless, domineering father, who hopes to see her married to her boyfriend Jonathan (he's away in New York for the entire film; his only "appearance" is in a phone conversation), because his family is equally rich. But soon enough Mary and Christopher fall madly in love, and the film accelerates to a tragic conclusion.

The film opens with a female narrator introducing us to Prince's character. "He lived for all women," she intones, " but he died for one." Talk about giving away the ending! It doesn't really matter though, because the movie is really all about beautiful locales and Prince's charisma, both of which if offers in spades. Shot in color, but reprocessed into black and white, the movie is visually stunning. Much of the film's tone and design has a '40s feel, though it obviously takes place in modern day, as things like boom boxes and answering machines show up. Plus, with a couple of exceptions, Prince and the Revolution's soundtrack for the film is completely modern (more on that in a bit).

It should be noted that Prince directed the film from a fairly solid screenplay by Becky Johnston (based on a basic story concept by Prince). Johnston has only two other film scripts her name, The Prince of Tides, and Seven Years In Tibet. So she doesn't do much, but she does it pretty well. Prince's direction feels natural and assured (making the disjointed Graffiti Bridge, which he also helmed, seem all the more puzzling). Apparently he took over from the original director only four days into shooting, causing Terence Stamp (aka General Zod) to vacate the role of Isaac Sharon (Mary's father).

The acting, all around, is solid. Of course, Prince has a natural sense of showmanship, which lends itself well to acting. And the character suits him as well and allows him to be a bit of a ham. Not that he chews the scenery; Christopher Tracy is partly a poet, partly a cad, and partly a mischievous little boy. Check out the scene where his landlord asks him to pay the rent and he playfully tries to intimidate her by giving her his "Bela Lugosi look." He's a far cry from The Kid in Purple Rain and Grafitti Bridge, who spent most of his time brooding. The real revelation is Kristin Scott Thomas, who is, I'll say it, luminous, as Mary.

Supposedly, Prince and Thomas had an affair during the shooting of the film, but there's not much evidence of that on screen. In fact, if the film has any large flaws, it's with Prince and Thomas' physical chemistry. They make a handsome enough couple, and their conversational chemistry is apparent in several civil and uncivil exchanges (including one that ends with Christopher calling her a "cabbage head"). But when it comes to gettin' freaky, something seems off. Maybe Prince the director had a blind spot in his own performance as a lover, but every time the two make out it looks uncomfortable, like a child pressing two dolls faces together in a clumsy approximation of kissing. Basically Thomas keeps her face still and Prince moves his back and forth like an orange on a juicer.

But what about the music? You might think that Christopher's job as a piano player would lend itself to some interesting performance scenes. It doesn't. Save for the opening sequence, there's only one performance in the film. That's not to say there aren't Prince songs. There are actually at least nine of them featured prominently throughout (all appeared on the Parade album). Notables include Kiss, which soundtracks Christopher and Mary's reunification (and yes, some of the aforementioned creepy kissing) and Anotherloverholenyohead, which accompanies Christopher's mad dash to intercept Mary's plane to New York.

Most of the songs are used this way, either as background, or to accompany montages. The two exceptions are cases where the song's appearance in the film doubled as a video. Girls and Boys finds Christopher taking over a stuffy restaurant with a boombox, dancing on a table, though not necessarily performing the song (he lip synchs some lyrics here and there). It begs the question, are we supposed to believe this is just a song he likes and that it's not him singing, or does he carry around a tape of his own songs to play whenever he feels like it? Either way, it's strange. The video for the song rehashes the scene, but cuts in some shots of the Revolution.

That brings us to the most memorable use of a song in the film, and the only peformance. Christopher dies at the end of the movie, and we're treated to a little coda where we find out what happened to Tricky (he moved back to Miami with the lady landlord and runs his own apartment building, thanks to Mary's generosity), then the camera pans to the clouds, where we find Prince and the newly-expanded Revolution playing Mountains, like psychedelic angels (and extremely apathetic ones too, in Wendy and Lisa's case). The credits roll as the band performs. It's weirdly cool. The video for the song is basically the same thing, only in color (where the fact that they're standing in front of a blue screen is much more obvious).

Overall, this makes Under the Cherry Moon less of a pop music movie than it is a starring vehicle with a soundtrack done by the star. It makes sense when you think of it this way, but considering that Purple Rain's greatest thrills were from the performance scenes, it's odd that Prince ignored his greatest strength.

Do you know what a "wreka stow" is? It's a place where you'd go to buy a Sam Cooke album. Many of the comedy bits in the film, fittingly, appeal to an African-American sense of humor (there is a difference between white and black humor, though obviously several places where they overlap). It's an interesting juxtaposition with the white stuffy setting of the film, as well as the white-dominated style and genre (there weren't many tragic romances featuring black leads in the '40s).

Prince's fashion choices in this film are a sight to behold. In an early scene you'll find him in a bathtub wearing a bolero hat (while Jerome sits on the edge and drops rose petals into the water - was film may have been hinting that they were more than just business partners). To Mary's birthday party, he wears an open-chested, open-backed black jumpsuit. I'm not even sure how that was physically possible. Elsewhere he favors midriff-exposing military style jackets.

Is Isaac Sharon so powerful that he can have a man shot down without provocation in front of at least 10 witnesses, and not have any consequence? The film never tells us. AND, if he was willing to kill the guy, why go to the trouble of offering him a $100K payoff? That's not how you grow your portfolio.

Critics hated Under the Cherry Moon, and very few fans went see it. It made $10 million at the box office. As a comparison point, consider that Purple Rain made $7 million in its first weekend (and $68 million total).

Under the Cherry Moon is one of the most weirdly watchable, intentionally melodramatic films I've tackled for Baby, I'm a Star. It's a document of a musician at the height of his fame, power and influence, doing whatever he pleases and damning the consequences.

Seeing it with a large crowd of Prince fans is highly recommended. In all other conditions your results may vary.
Posted by Paul V. Allen at 3:49 AM