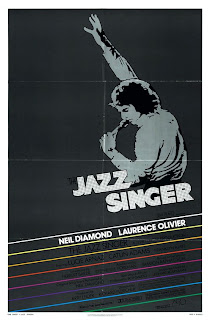 In 1980 Neil Diamond's star had faded somewhat, yet someone somewhere with money and influence (probably Neil himself) thought it would be a good idea to remake the 1927 Al Jolson film The Jazz Singer, with Neil in the title role!

Neil plays Yussel Rabinovitch, a Jewish Cantor. In fact, he comes from a long line of Cantors. But he has a dream of becoming a singer/songwriter, despite the objections from his wet-blanket wife and traditional father (a paycheck-seeking Laurence Olivier). When he gets an opportunity to have one of his songs recorded he flees to L.A. and his career takes off, at the expense of his former life. Will he be able to balance the expectations of family with his dreams of a music career?

To satisfy his performance jones in New York, Yussel does shows at an all-black club under the name Jess Robin. The rub is that he has to use make-up to pass himself off as a black man. Thankfully there's only one scene of this, and it ends with Neil's whiteness being discovered, getting into a fight with Winston Zedmore (from Ghostbusters), and going to jail. All this after a stirring rendition of You Baby, which sounds like a lost Motown classic. Following this, Neil must listen to both his wife and his father tell him how ridiculous his dreams are. This is always a good thing to do to your loved ones…crush their spirits!

When Jess gets an opportunity to have his ballad Love On The Rocks performed by a real recording artist (the dreamy Keith Lennox) he jumps at the chance and goes out to L.A. At this point the film presents the viewer with a real moral conundrum: Is Jess being selfish by leaving behind his commitments, or is he right to follow his dreams? The events that follow try to make that a simple question in favor of the latter, but I'm not convinced.

Anyway, it turns out Lennox wants to ruin Love On The Rocks by performing it as a screaming rocker. So with the help of Molly, a record company rep played by Lucy and Ricky's little girl, Jess decides to make a go of performing his own music. He nabs a spot opening for Zany Gray (?) and despite his metallic maroon shirt, impresses. This leads to a record deal!

As things snowball with Jess's career, he and Molly spend so much time together they can't help but begin making goo-goo eyes at one another. But, oops, Neil's wife is still in the picture and is still NOT happy about this whole becoming a rock star thing. This leads to divorce.

Of course Jess goes immediately to Molly after his divorce is finalized (the ink probably wasn't even dry) and declares his love. It comes off as desperation, but quickly pays off. Then we are treated to a goofy "in love" montage replete with cultural misunderstandings, dreamy looks, tandem bicycle rides, and a chest-hair-heavy sex scene.

Then dad comes to visit, and promptly disowns Jess for a variety of complex reasons, but mainly because Molly isn't Jewish. This leads us into the classic A Star Is Born arc, wherein Neil becomes a complete ass (treating Molly poorly, throwing fits during recording and rehearsal). Then, inexplicably, Neil sets off to wander across America alone. He grows a beard, buys a cowboy hat and takes up smoking.

But it turns out he left Molly with a bun in the oven, and she goes ahead and has the baby while he "finds himself." When he finally returns, to find Molly and his son frolicking on the beach, Molly embraces his return. He patches things up with his dad at Yom Kippur, resumes his rock star career, and the credits roll to the strains of America.

But wait, let's do the math. If Jess had no clue Molly was pregnant when he left, then she couldn't have been very far along. So let's say she was one month pregnant when he left. The kid appears to be at LEAST six months old when Neil returns. That would mean he was traveling for 14 months. If someone disappeared from your life for over a year, leaving you to take care of a child alone, wouldn't you at least give them a right hook in the jaw before you let them move back into the house? Come on!

To be fair, Jess does attempt to get his wife to come out to L.A. with him, but what's strange is that Hello Again is used as a theme for Jess and Molly, when it actually describes loving someone long distance, and this applies much better to his wife.

I hate to be a prickly pear, but Neil technically isn't a "jazz singer" at all. In fact, you'd be hard-pressed to find any jazz in this movie anywhere, save the brushed drums on Summerlove! Would it have hurt anyone to change the name to The Pop Singer?

Does disowning still happen? We see it in movies and T.V. all of the time, but you rarely meet anyone who has actually been disowned. And at what age do your parents actually stop owning you?

Before watching this movie I'd never before noticed just HOW much Neil resembles Larry from Three's Company.

Despite some tasteless moments and misogyny, this movie will be supremely entertaining for any Neil fan. You can tell he really cared about this story, and connected with it. And there's no denying that the soundtrack produced some of Neil's best songs and gave him a strong comeback!
Posted by Paul V. Allen at 10:59 AM

This is an excellent blog. Keep it going.You are providing
a great resource on the Internet here!
If you have a moment, please take a look at my used video games gallop racer site.
Have a great week!