A musical rumination on fame, growing up, and testing an audience's patience 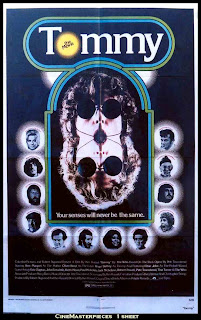 Pete Townsend has a story to tell you, and he doesn't really care if you "get" that story or not. The Who's discography is littered with high concept projects like Quadrophenia, Lifehouse (which, with the story abandoned, became their best album, Who's Next), and Tommy. The latter was a hit as an album when released in 1969, so Hollywood said: Let's make a movie!

It's hard to tell if this was a bad idea from the get-go, or if all of the decisions made thereafter just made it seem so.

Ann Margaret, wearing the same sweater she wore in the beginning of Bye Bye Birdie, falls in love with a military man. They get married, have a baby named Tommy, and then the military man dies in war. I must say that throughout this movie, Ann Margaret is nearly consistently foxy, even 15 or so years out from her prime. Well done to her. Anyway, Ann meets a new man, who is instant trouble. In a scene that causes the first (but not last!) significant confusion of the film, Tommy witnesses either 1) his mom and this new man having sex, or 2) his new step-dad killing his father. Perhaps this is metaphorical. I don't know.

From there, we go to Tommy pretty much grown up and now being played by Roger Daltry. There's something poetic in having Daltry play Tommy, in that he was the voice for The Who, and here he is stricken silent. Anyway, from here the film takes us on a disturbing series of adventures for Tommy, meant, I assume, to signify the slow corruption of growing up. Sadly, I'm not buying into Pete Townsend's worldview at all. At some point, Tommy becomes a pinball champion, gets famous, then rebels against his fame (controlled of course by his step-father) and gets his voice back. Credits.

Oh, and did I mention that there's absolutely no dialogue? None. The music plays in some form from beginning to end.

At 25 minutes in we get the first of many strangely interesting moments. This is not only the first appearance of the rest of The Who, but also Eric Clapton. And they're all wearing priests' robes and performing next to a big statue of Marilyn Monroe! What the mind really wants to know is that with both Pete and Eric playing guitar, who takes lead?

Tina Turner throws in a stunner of a performance as the Acid Queen, who introduces Tommy to drugs and/ or sex (not sure which, really, but it involves syringes, snakes, skeletons, and a sarcophagus). Can I just say that Tina Turner is the all-time champ of musicians at picking acting roles? I mean, this AND Mad Max Beyond Thunderdome?! She needs some sort of special Oscar for this, or at least a Golden Globe.

Keith Moon appears again, this time as a nasty uncle in the hands down most disturbing scene in any music movie. He sings Fiddle About, which is about child molestation. You can't really blame the filmmakers for this one: It's a disgusting topic any way you film it. But what makes it so disturbing is how much Keith seems to be enjoying himself!

There's a scene in which Tommy confronts himself in a junkyard. The writer, producers, and director of Superman II should be ashamed for blatantly ripping this off!

In the most transcendent moment of the film (okay, it's the only transcendent moment), Elton John appears as Tommy the Pinball Wizard's opponent. Inexplicably, he's been given super long legs and huge-ass shoes, but he looks great and sings his heart out, and mugs appropriately to the camera. It shall remain one of the great mysteries of all time as to why Elton never got his own movie in the '70s. A shame, really. Anyway, The Who play along with him and then destroy their instruments at the end of the song…honestly, this scene almost redeems the whole film.

Jack Nicholson sings. I don't even need to say anything about this, do I?

Ann Margaret has an extended scene in which she's watching commercials in an all-white room. She begins to drink and hallucinate and ends up wallowing in baked beans and chocolate. It's sort of sexy and gross and baffling all in one big package.

Stephen Hawking needs to watch this movie, because it may defy the laws of physics as our universe knows them. Time actually slows down while you're watching. It's an amazing phenomenon really, and I must commend all involved.
Posted by Paul V. Allen at 6:43 PM

I'm pretty sure it was "Lifehouse" that Townshend was working on, not "The Lighthouse". I could be wrong, but I'm not. Great snarky reviews. Perhaps a little research might go a long way. Not an exncyclopedia, that would require getting up. There's a new thing called a "search engine". Try it. It's quite helpful.