There are some higher 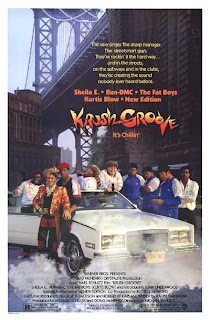 Krush Groove is the first rap music movie. For that alone it gets props, but unfortunately, its notoriety stems mostly from the fact that it was a flop (especially stinging because it came in the wake of Purple Rain, and probably labored under unrealistic expectations of the same level of success). You might remember that it inspired the famous exchange in Dogma where Ben Affleck attempts to use Matt Damon's faith in the film's box office prospects to prove that he is more often wrong than right.

We've got several storylines going here, all interconnecting in some way. The main plotline centers around Run D.M.C. who have just made their first hit record King of Rock. Their small record company, run by Run's brother Russell and Rick Rubin (playing himself) is struggling to meet the demand for the record and Russell makes a shady deal with the guy who plays the shady promoter in Rocky V.

Next we throw Sheila E. into the mix. She's just starting out and both Run and Russell take an interest in her career and her romantic availability. Sheila likes Russell better than Run. This obviously leads to tension and with Russell being pressured to pay back his loan, Run takes his group to a bigger label and a lucrative contract.

Finally, we've got the Fat Boys (at this point calling themselves the Disco Three), who are attempting to break into the business. Throw in Curtis Blow and lots of cameos and performance scenes, and mix well.

Anyone with at least rudimentary knowledge of Def Jam Records will know that the character Russell Walker is a thinly-fictionalized version of Russell Simmons. And in case you don't pick that up, the movie's credits inform us that "The Russell Walker character was inspired by the life of Russell Simmons." What's amazing to me is that Simmons exhibited enough restraint to not play himself, and let Blair Underwood have the job. You might think that it was a movie studio and/or director decision to have a famous actor playing this important role, but this was Blair Underwood's first movie. At that point, L.A.Law wasn't even a glimmer in Susan Dey's eyes.

Anyway, the first thing that strikes me about this movie is the style. The clothes and lingo still seem fresh. Maybe this is because eighties hip-hop culture has made a comeback, but I tend to think that there are just certain things that will always be classic: Volkswagen Beetles, Converse Chuck Taylors, black stocking caps, and Adidas tracksuits.

The other thing that strikes me is how many performances there are. It's obviously taking a page from the Purple Rain book. However, as fun as the songs may be, they have no real resonance in the story (save All You Can Eat by the Fat Boys). Like I said, we get a lot of performance clips, and some are great (Fat Boys doing Don't You Dog Me in the staircase of their high school, Sheila E. performing Love Bizarre looking and sounding so much like Prince that it's a little disconcerting, and some cameos I'll mention later). But because the movie packs so many artists and storylines into such a small place, you ultimately feel like you didn't get enough time with any of them, save maybe the Fat Boys. Run D.M.C. get especially short changed, and Jam Master Jay specifically. In fact Jay only has one scene where he isn't background decoration, and unfortunately (considering how he died) it features him threatening to pull out a gun in a relatively benign situation.

That said, Sheila E. cuts a particularly appealing character in the time she's given. There's one scene at her apartment (which features a Prince poster on the wall I must add) where she claims that anybody can rap and then proceeds to demonstrate her skills. She's not as convincing as a love interest, and there's a love scene between her and Blair Underwood that didn't do much for me, even with the Force MDs' Tender Love playing over it. Kurtis Blow is also a very decent character and a voice of reason in the film's events. I didn't realize before that he was the real-life guru behind the Fat Boys, but apparently he got them together and did their beats. This is played out rather tenderly and briefly on screen.

Finally, let's talk cameos. About an hour into the film there's a succession of cameos that is fairly mind-blowing. First we've got LL Cool J with a surprise appearance in the Krush Groove offices, begging for an audition. He's skinny, but throws down a bit of Can't Live Without My Radio and impresses nicely. Immediately following this we see New Edition in shiny silver matching suits performing My Secret. I'm intrigued by New Edition because they keep trying to reunite, and keep meeting with complete apathy. Then right after that, you have the Beastie Boys! They come out doing their very first single, the little known She's On It. Who could've predicted at this time that they'd become what they did? Amazing.

Hoop Dreams fans, look for an Arthur Agee lookalike in the background of the scene where the Fat Boys try to get into the Disco Fever club for the first time.

There's a boggling loss of decency in a brief high school scene where one of the Fat Boys is roasting a fetal pig. I seriously believe cinema could have done without that…even Jon Waters would have left this on the cutting room floor.

Rick Rubin is an odd guy. He started out doing the hip-hop thing and now is an in-demand rock producer. This is foreshadowed in one scene where he can be spotted in a Husker Du T-Shirt. Shout out to Minneapolis!

Run D.M.C. actually work at a car wash at the beginning of this movie, and that's sort of inexplicable. But, it does inspire the great line: "You won't see Lionel Richie working at no car wash."

The movie only runs 90 minutes, and with so many things going on, it can't help but sink under its own weight. Watch it for the performances, cameos, and that slice of eighties hip-hop style, not for plot or character development.
Posted by Paul V. Allen at 8:19 AM

Hi, I was just looking around some blogs and checking different templates for ideas. Good blog with a nice template. I can start my own blog on ebooks thanks to your blog. I will visit weekly by the way. Like your ideas.