Can't we at least try? 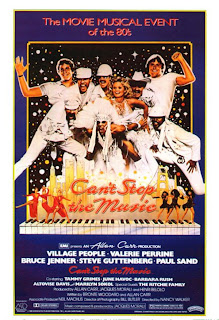 Though there should have been every indication that Village People's days as a mainstream commercial force were at their end by 1980, someone somewhere made the horrible decision to give them their own movie. Okay, maybe the idea wasn't completely horrible. They had a fan base that might have given the movie respectable earnings and cult classic status. But that "might have" hinged on the fact that they make a semi-decent movie. In that, they failed.

Steve Guttenberg plays Jack Morell, an aspiring songwriter who lives with a retired supermodel, played by Lex Luthor's girlfriend from Superman I and II. In the opening scene Jack quits his "demanding" record store job and then celebrates by roller-skating gaily through the streets of New York.

Jack has an opportunity to DJ at the "happening" club where they hang out, Saddle Cramps. As he does this, Samantha (the supermodel) dances with a series of strange men (including one name Phillipe, who dresses in full Native American garb...okay not "full" he tends to prefer extremely short and tight cut-off jeans over a loincloth).

Through a series of tedious events, Samantha and Jack decide to form a group with the aforementioned men as singers. The rest of the movie follows their attempts to achieve stardom with an increasing cast of characters joining the ride, including Jack's mom, a lawyer played by Olympian Bruce Jenner, a record exec, and the head of a modeling agency.

This movie is full of inexplicable things. For example, we have no idea how Jack and Samantha met and decided to live together, or how long they've done so. Therefore it's strange when they start talking about his songwriting dream as though it's something they've never previously discussed. It's like he woke up one morning and decided that's what he wanted to do. This leads to a series of delayed realizations, such as 1) Samantha has close ties in the record biz; 2) Jack can't sing; and 3) we could recruit all these singers we know (so what if they happen to have proclivities toward dressing like construction workers, cowboys, and Indians). Odd.

The scene where Samantha goes out to recruit the guys to sing is notable for a couple of reasons. One is the fact that she gets an ice cream cone before she starts, and it keeps changing flavors as the scene progresses. It isn't prominent enough to be a visual gag, so it just looks like sloppy filmmaking. The other is the fact that the Construction Worker gets his own dream sequence in which he sings a spectacularly horrible song called I Love You To Death, which by all appearances is about domestic abuse.

Bruce Jenner (this film was supposed to launch his acting career, but he only made one other film after this one) comes out of nowhere. There's no satisfying explanation for why his character becomes affiliated with Samantha and Jack. When he first meets them, he seems to be having fun, and then he just storms out. Then he comes back again the next day and engages in some slapstick comedy / sex with Samantha.

Ray the Policeman shows up at a party and joins the group impromptu. They note that he was formerly in a group called the Cop-Outs. Kind of humorous. Interesting fact I learned from the DVD: The original Policeman (who sang on all the hits) had left the group right before the movie. He was obviously a smart man.

After the group gets a chance to record a demo, they decide to add more members and this leads to an audition scene that outdoes itself. Nerd Alert: One of the comics books I used to read was called The Legion of Super Heroes. They had about 30 members, and they would periodically have try-outs where these complete losers with strange super powers would show up. This scene reminded me of that. Anyway, from this we get The Biker a.k.a. Leatherman, an obviously gay and obviously hairy fellow who does a knockout version of Danny Boy. The Army guy also comes in here, but for some reason he doesn't have to audition.

I guess one of the big complaints about the movie from the group's fanbase was the fact that the filmmakers "straightened it up" for mainstream consumption. So the movie rolls along on the pretense of straightness (at the initial party scene all of the Villagers save Phillipe seem to have lady friends), and then we get to the YMCA scene and GAYNESS bursts out like the sun after a brief rainstorm. Seriously, this has to be one of the gayest non-explicit sequences ever filmed. The montage includes showering, synchronized swimming, gymnastics, locker room hi-jinks, wrestling, dance boxing, push-ups, and weight-training. All featuring men. Not a woman in sight. Not that there's anything wrong with that.

The band's rise to the top never really happens. They badger a beleaguered record executive into signing them to a contract, and perform in a milk commercial with Samantha (using "milkshake" as a euphemism waaaay before Kelis ever thought to). Then they perform a triumphant one-song set in San Francisco at the end of the film and the credits come, leaving us all feeling like we barely know the Village People any better than we did a couple hours earlier.

Is Jack supposed to be gay? The supermodel mentions several times how they have a strictly platonic relationship, and we never see him show any romantic interest in anyone, man or woman.

The fact that Steve Guttenberg still had a career (and how: Police Academy, Cocoon, Three Men And A Baby, and Short Circuit, all with ensuing sequels) after this film is simply amazing. His acting here is so horrible, and in one scene they have him wearing white overalls with no shirt.

Speaking of sequels, the record executive who eventually signs the group is played by Paul Sand, whose most famous role is the boxing coach in Teen Wolf Too. This is not a lie.

If the movie wasn't so afraid to be gay there might have been more lines like this one delivered by Jack: "Anyone who can swallow two Snowballs and a Ding-Dong shouldn't have any trouble swallowing a little pride."

This movie might be ageist. An old lady who hits people with her bag shows up twice, and in Bruce Jenner's introductory scene he gets mugged by an old woman with an accomplice who rides a moped and wears a jumpsuit and helmet (he looks like one of the Beastie Boys in the Alive video).

In one heartbreaking moment, Jack calls the Village People sound "the music of the '80s." Ironic that this line is in the film that killed their career (at least temporarily).

Village People were an inherently outlandish concept that lent itself to this sort of marketing, so it's sad that what could have ended up as a gay cult film ended up so pedestrian. There are only four or five musical numbers, and much-too-much time dedicated to boring characters that surround the band. Most of the Village People themselves probably only had one or two lines, IN THEIR OWN MOVIE.

Anonymous said...
This comment has been removed by a blog administrator.
8:41 PM