This is one bridge that needs to be burned. 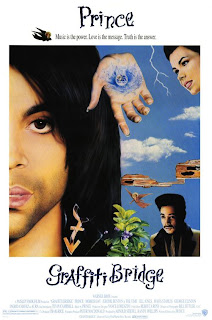 Graffiti Bridge was written and directed by Prince and was billed as a long-awaited sequel to Purple Rain. It's actually amazing that this film was made, considering that Prince's second movie, 1986's Under The Cherry Moon, was about as popular as a screen door on a submarine.

As I understand it, the Kid now has his own nightclub (Glam Slam, which was a real club Prince owned in downtown Minneapolis, but the interior scenes don't appear to have been filmed there). He's in debt, and his music isn't bringing large crowds, though the people in the club seem to be enjoying themselves, especially all the couples who are getting freaky in the booths. Instead, the Kid is all wrapped up in some sort of spiritual crisis, spurred on by a mysterious woman named Aura (Ingrid Chavez). The Kid's old rival, Morris Day, also has a night club and he's very interested in putting the Kid out of business, as well as gaining Aura's affections.

The end credits say the movie was filmed at Paisley Park Studios in Chanhassen, Minnesota. Can I just say that it looks like it? I don't believe more than two scenes were actually filmed on location. At least Under the Cherry Moon had that going for it. From the nightclub exteriors of Seven Corners to the wooded area containing the tagged up bridge of the title, the settings have an enclosed, fake, low-budget feel to them.

Anyway, as we begin, the Kid's girlfriend leaves him because…he likes to write music. I think. At this point he starts seeing Aura, who repeatedly tells him "It's just around the corner." What "it" is, nobody knows. She disappears into thin air a lot, but also hangs out by the titular graffiti bridge in the fake woods, and writes poetry. I must mention here that she also comes with a whispered interior monologue a la every character in David Lynch's version of Dune. I don't really even have an opinion on this.

So Morris Day's club is called Pandemonium, and he has a sort of gangster-like hold on the area of nightclubs called Seven Corners (an actual place in Minneapolis, but they're all college bars and restaurants, not nightclubs). Curiously, there are apparently only four nightclubs (the other two are owned by Mavis Staples and George Clinton!) in Seven Corners. Let me just say here that I don't buy Morris and Jerome's transformation from members of a rival band to gangsters. That whole bit is fuzzy for me. But I must admit that the old chemistry is there even if the sparkling dialogue isn't…perhaps this is why they get as much or more screen time as Prince himself.

But even though Prince's supposed purpose here is to win Aura's heart and protect his club, he doesn't seem especially interested in either. He's apparently not terribly concerned about the operations of his club, or even being there on a regular basis. He seems to be sickened by the blatant sex and skirt-chasing of Morris and Jerome. (That doesn't stop him from freaky with Aura to the tune of Joy In Repetition, replete with a lot of above-the-clothes groping and hip-straddling).

He also spends time writing letters to his dead father (one of the very few connections to Purple Rain, and a tenuous one at best) and seems to want something out of that, but what we don't know. Aura sees a list of songs he's been writing, all have titles referring to spiritual matters, but are any of them played in the movie? No, instead we get mindless jams like New Power Generation and Can We Funk?

It's never clear why Aura, who seems the most lucid character in the movie, would even consider dating Morris. But, she always seems to know something we don't, and probably never will. So, when the Kid steals her away (literally, he kidnaps her), tensions escalate between the Kid and Morris and this results in, besides a few sorry "intimidation" attempts by the Time, a song challenge.

A cool idea, and one that brings up fond allusions to Purple Rain, but we get no clear criteria or rules, and once the competition starts it's intended to be obvious that the Time's performance of Shake is better than Kid's pyrotechnic Tick, Tick, Bang though I'm not convinced.

Then, danger befalls Aura, as she has warned would happen since the beginning of the movie, and Prince uses this as inspiration to win the contest by performing Still Would Stand All Time a pretty, but unremarkable, song. Jerome is amazed: "He won with a ballad."

But wait, don't the Time get a second chance too? Apparently this is like a baseball game in P.E. class where one team got to bat an extra inning and then the period ended and they declared themselves winners while the other team protested to no avail. One can't help but wonder what would have happened if the Time had busted out Ice Cream Castles. One also can't help but wonder why Morris would abide by silly song contest rules when earlier he had no qualms about breaking and entering, threats, and destruction of personal property.

So Morris has this sudden change of heart, lets the Kid have his club, and goes to get it on with his annoying girlfriend. The Kid reprises New Power Generation, and we're out. As the credits roll, we're left wondering if Aura was an angel, and whether what we just watched could truly be considered a movie.

Why couldn't Thieves in the Temple - the best song on the soundtrack - have been utilized better? It's wasted with a montage and band-less performance in which Prince apes some Michael Jackson moves in smoke silhouette style. And this is a cool, creepy song that could have had great resonance with the events of the movie. It seems like Prince was trying to save some money and double this as the video for the song.

What is the purpose of Tevin Cambell coming out and singing Round and Round to the Kid on the street early in the movie? It's a great song, yes, but seems to be in the movie only so it could be placed on the soundtrack. The performance is not built up to, nor does it have any repercussion later in the film.

Why isn't Can't Stop This Feeling I Got in the movie? If any song on the soundtrack would seem custom-made to go in a movie, this is it. It would have been a great performance scene a la Let's Go Crazy in Purple Rain. At least play it over the credits!

What happened to Apollonia? The Revolution? If you were going to call this a sequel to Purple Rain, shouldn't you at least attempt to address these things? A sequel only works when it feels like a natural continuation of the original story, and this doesn't. At all.

The most interesting thing about this movie is how it dovetails with Prince's career path at the time. By that I mean that in the late '80s he was on the commercial decline. The Batman soundtrack had given him a commercial success, but not a critical one, and he'd lost a lot of fans with the Lovesexy album (which was mostly concerned with spirituality and was reportedly inspired by Ingrid Chavez). So Prince turned that pain into art, and as a result put the final nails in the coffin of his movie career.

Jimmy Jam is the most jovial person to ever appear in a movie. Every scene he's in he looks like he's just damned happy to be there. Considering he'd already had several hits with Miss-Jackson-if-you're-nasty by this time, it can't be because he was so thrilled to have a taste of success. He just seems to be a joyous guy, which is nice to see.

Maybe we just need to wait for early '90s nostalgia to rear up and cast a rosy glow over everything from that era, but Graffiti Bridge just doesn't evoke that "those were good times" feeling yet. It's inevitable that this sort of rebirth WILL happen though; they're already showing Full House and The Fresh Prince Of Bel-Air on Nick-At-Nite. But the sad fact is that even period nostalgia can't redeem the fact that this is a bad movie. Everything that Purple Rain did right, this movie does wrong.
Posted by Paul V. Allen at 9:24 PM