By any other name... 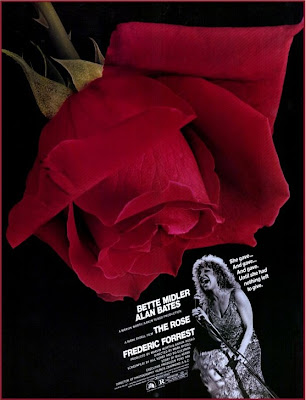 I had no idea what to expect from The Rose. All I knew was that it starred Bette Midler as a musician and featured a song called The Rose. I suppose, if pressed, I would have told you that it was a semi autobiographical story about Midler herself, and that the songs would mostly be maudlin showtunes and classic pop covers.

Boy, was I wrong.

Midler plays Mary Rose Foster, a balls-out rock 'n roll singer at the height of her fame. After a brief, wordless opening scene that hints at sadness to come, the film finds Rose in the midst of a 1969 world tour.

After a raucous show in New York, Rose meets with her British manager Rudge (Alan Bates) and tells him that she needs a year off. Fearing his wallet suddenly becoming lighter, he argues vigorously against the idea. As a pep talk he calls her, “one of the best singer ladies in the history of the world.” At a subsequent press conference, she turns it on for the media, but mentions her year off.

The tour continues, and though we learn that Rose has beat a heroin addiction, she is still drinking heavily, often on stage. But on stage is also seemingly the only place where she’s in control of everything. She expresses her feelings about being a woman (“we’re waitresses in the banquet of life”) and her exercise plan (“drugs, sex, and rock ‘n roll”).

Right after the second New York show, Rudge rushes Rose off to a meeting with Billy Ray, a venerable bluegrass musician. The meeting quickly turns sour as Billy Ray (Harry Dean Stanton in prime Roman Grant mode) tells Rose that he didn’t like her version of one of his songs on her latest album and asks her not to cover any more. Rose then deduces that the only reason Rudge set up the meeting was in the hopes of getting Billy Ray to sign with him.

This incident sets off an argument between Rudge (who’s looking like a generally terrible manager at this point) and Rose, which culminates in her smacking a random dude in the face with a bottle and then commandeering Billy Ray’s limo. The driver, who introduces himself as Houston, is a handsome fellow played by the dad from Valley Girl (Frederic Forrest). The two strike up a friendship, and when Houston defends Rose’s honor in a hick diner, she clearly starts to fall for him.

The two continue their adventure in a gay club called 777, above which Rose used to have an apartment. When the staff realize she’s there, a drag queen comes out impersonating Rose. Eventually he pulls her on stage to sing along and they’re joined by Diana Ross and Barbara Striesand. Houston and Rose then go back to her place and things take their natural course.

Unfortunately the bliss the two find is short lived, as their late night antics have caused Rose to miss a recording session. Rudge once again chews her out, which leads her to take it out on Houston, whom she calls “a piece of meat in a chauffeur’s cap.” His feelings are hurt and he runs off to a men’s hotel and spa. This results in a madcap chase and eventually to reconciliation when he reveals that he’s a sergeant in the Army who has gone AWOL. She invites him to join her on tour.

The tour moves on to Saint Louis and Memphis, with some “life on the road” scenes peppered between, including one where Rose leads a singalong on the plane (Almost Famous, you should be ashamed). Rose is still clearly weary of the pace of her life, but Houston seems to make it better, at least until Sarah, one of Rose’s former lovers, comes back into the picture. Seeing them canoodle pushes Houston over the edge. He gets mad, hits Rose, and takes off.

The tour’s next stop is Rose’s Florida hometown. We learn that he has been anticipating this show with equal parts trepidation and excitement. She’s eager to show the people from her past how far she has come, and maybe how much she’s risen above them. This is illustrated by a scene where she goes to a market where she shopped as a kid. The manager warmly recognizes her as Mary Rose Foster, but this isn’t enough for her. She wants him to recognize her as The Rose, and when he doesn’t she pulls out one of her records, signs it, and storms out angrily.

Next Rose goes to meet with Rudge before the show, and restates her desire to take a year off. Sick of it, he issues an ultimatum. Either she carries on with the tour as planned, or he’ll cancel the evening’s show (and thus her chance at redemption) and fire her as his client. She is stunned.

At this low point, Houston returns, and Rose sees a chance to finally get her wish: To get away from the crush of fame and relax. But her nostalgia intervenes, and on their way out of town, Rose wants to stop at the bar where she got her start as a performer. She takes the stage, but Houston gets into it with one of Rose’s former classmates with whom she was once, ahem, intimate. After the scuffle he takes off again, this time for good.

Rudge, having overplayed his hand, decides he wants to do the show after all, and tries to get Rose back, but not before she gets ahold of some pills and heroin and calls her parents, with whom she hasn’t spoken in a long time. She washes the pills down with some whiskey, shoots up, and then gets flown into the concert for a triumphant homecoming performance. The crowd is adoring, but the cocktail in Rose’s system is too much. While performing Stay With Me, she collapses on stage and dies. The Rose plays, the end.

The Rose, then, is basically the story of a talented-but-insecure woman who gets chewed up by her own fame (isn’t it fitting, then, that when I recorded this on my DVR that the Palladia channel showed the video for Britney Spears’ My Prerogative right before the film?). It’s basically a fictionalized version of Janis Joplin’s life, making it a strange hybrid of categories. It's part biopic, part fake band, and part starring vehicle.

That's not the only way the film is unconventional. As I've said before, most pop music films follow the A Star Is Born story arc: beginning struggle, fame, too-big-for-britches, triumphant comeback. The Rose offers basically only the middle part of the act. Rose is at the height of her fame when the movie begins, and she stays there. Her internal struggle is the story, and her career is purely ancillary. I think this is important, because so many pop musicians have managed to maintain a high level of quality work and even a good reputation while at the same time struggling with many demons.

Where does the film coincide with true events in Joplin’s life, you may ask? Many of the details are the same: the addictions (especially the bit about kicking heroin but substituting it with alcohol), the volatile relationships (including at least one with a woman), the armpit hair, the resentment of her small hometown (though Joplin was from Texas, not Florida), and the style of music. Many of the small details are different, of course, and though Joplin did die of an overdose in her prime, it didn't happen on stage.

Fittingly and realistically, the movie offers no clear path to Rose’s demise. She’s obviously self-destructive, but there’s more than that. Rudge’s consistently crappy decisions (not heeding her wish for a break, the ill-advised meeting with Billy Ray, the ultimatum at the end), Houston’s macho inability to accept her faults, and a consistent disregard for Rose’s feelings by everyone in her life, are also clearly to blame.

Finally, the film's performance sequences are gritty and full of energy, with a strong live feeling. Midler may not have a history of performing these types of songs, but she knocks it out of the park, bringing a manic presence, and rough, powerful vocals. The songs themselves are very much in the rock/blues/soul vein and are workmanlike. None stand out as especially amazing, but none are terrible either.

How did Midler get chosen for this role? Though she was already famous at the time as a singer thanks to her Barry Manilow-produced album The Divine Miss M, The Rose marked Midler's film debut. There was no evidence that she could carry an entire film herself (even though she does so admirably; the second-to-last scene, in the phone booth, is heartbreaking). And as I said before, this wasn't even her style of music. Anyway, whoever made the choice was a smart cookie, and Midler was rewarded with a Golden Globe win and an Oscar nomination for best actress. In fact, the film got lots of accolades from the various self-congratulatory Hollywood award parade that year. It didn't win a lot, but it got a lot of nominations.

Director Mark Rydell has a curious resume. An actor-turned-director (he appeared in As the World Turns and in a smattering of films), he directed some TV shows (I Spy, Ben Casey, Gunsmoke) before going on to movies. Following The Rose, he directed On Golden Pond, The River, and then reunited with Midler on For the Boys. He's done very little of note since.

Maybe it's just me, and maybe it's slightly disrespectful, but the final song and death scene reminded me of Walk Hard, where Dewey Cox introduces the song Beautiful Ride by saying, "Now I'm going to sing a song will sum up my entire life"). After the song, the film tells us that "Dewey died three minutes after this performance." By the way, you should see Walk Hard if you haven't already. And if you have, you should see it again.

The Rose is a valuable entry in the Baby, I'm a Star canon. Though not always easy to watch, it's a sad, subtle, unconventional, and unflinching film. And if nothing else, Midler's unexpected, electric performance is worth the price of admission.
Posted by Paul V. Allen at 3:49 AM

Just watched "The Rose" for the first time ever tonight = thanks to your review.
Spot on!
Loved the music, Midler's performance had me in tears.

Thanks so much for your honest review :)

Maybe the worst film about rock music ever made and I include "Have a Wild Weekend" in that assessment. Bette Midler - blues singer - amusing indeed.