Tryin' to throw their arms around the world... 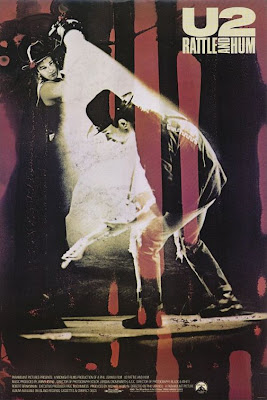 In 1986 U2 released the biggest album of their career. It was called The Joshua Tree and it has sold 25 million copies worldwide, won two Grammys, and spawned two number one songs, I Still Haven't Found What I'm Looking For and With Or Without You (the album's other standout, Where the Streets Have No Name only made it to a measly 13 on the charts).

U2 needed something impressive to follow this up, so while on their 1987 U.S. Joshua Tree tour, a film crew followed the band and documented not only their triumphant concerts, but also their exploration of America and the recording of new songs.

The whole shebang was released as a film and a soundtrack album, both called Rattle and Hum.

Rattle and Hum straddles the line between documentary and concert film, more often than not falling on the side of the latter. Roughly 80% of the movie is footage from shows in Denver, Colorado and Tempe, Arizona. And since this was the Joshua Tree tour, 7 of the 11 songs from that album are featured in the film. Along with them is a mix of older classics (Bad, MLK, Sunday Bloody Sunday, and Pride (In the Name of Love)) and covers of classic rock tunes (Helter Skelter, All Along the Watchtower).

The rest of the film consists of very brief interview snippets, a "candid" backstage moment, studio performances of new songs (Desire, Van Demian's Land), and a visit to Memphis. The band were busy at the latter, finding time to visit to Graceland, record Angel of Harlem at the famous Sun Studios where Elvis, Carl Perkins, Jerry Lee Lewis, etc. first made their names, and sit by the interstate and watch the cars. There's also an extended sequence documenting the recording of When Love Comes to Town with B.B.King.

While in Harlem, the band visit the New Voices of Freedom, a gospel choir, and sit in with them for a stirring version of I Still Haven't Found What I'm Looking For. As contrived as that may seem, it works, especially with the amazing acoustics of a church elevating everyone's performance.

The performance of Sunday Bloody Sunday is passionate and firey for good reason. It took place on the day that 11 people were killed in Enniskillen, Ireland in a Remembrance Day bombing by the Irish Republican Army. Mid-song, Bono goes on an angry, but well-spoken rant against the events, at one point shouting, "Fuck the revolution!" In a brief interview snippet in the film he seems embarrassed and wonders aloud if it should even be included in the film. I'm glad it was. Despite their lyrics, this was the first time many Americans became aware the political activist side of the band, and while it served them well on this occasion, it doesn't later. See below.

In terms of documentary moments I liked, I was fascinated by the visit to Graceland. It wasn't so much the oddity or social commentary of it as it was drummer Larry Mullin Jr.'s interview about the experience. He seems to have been genuinely moved, and he speaks at length (well, at least by the interview standards of this film) about his love for Elvis (he even has a similar haircut). He gets the heebie jeebies about Elvis' grave being on the premises, and there's an extended shot of him looking uncomfortable while talking about it.

The rehearsal and recording with legendary blues guitarist and singer B.B.King is not especially insightful except for the moment during rehearsals when B.B. admits that he's "horrible with chords." Bono seems taken aback, but gamely replies that the Edge will take care of all the chords.

Another revealing moment comes via bassist Adam Clayton. When asked about the film's purpose, he says it's documenting a musical journey, and that all bands go through stages in their career, and that Rattle and Hum captures them at this particular stage. "We're not the same band that recorded War," he says. Later, David "the Edge" Evans adds, "Music can get so boring, so conservative, so predictable." Is it any wonder that the 10 years following the film found the band experimenting heavily and constantly reinventing themselves?

Bono is curiously quiet during the interview segments. Maybe that's because he saves it all up for the stage.

To whit, he's responsible for some of the film's less worthwhile performances. During both Silver and Gold and Bullet the Blue Sky, he goes off on didactic screeds against apartheid and televangelism respectively. I have no problem with his political stances, I just don't think we need to hear them in the middle of a rock concert. At least put them in the lyrics and don't bother with the VH1 Storytellers thing. It's that kind of sermonizing that makes the band seem pretentious, like they're doing something more than playing songs for people to enjoy. The film doesn't do much to lessen that particular view.

Bono announcing a mediocre version of Helter Skelter with the comment, "This is a song Charles Manson stole from the Beatles; we're stealin' it back" doesn't help. Nor does the sequence that finds the band on a tour bus in San Fransisco working out a cover of Dylan's All Along the Watchtower. We're made to think that this is the first time the band are even considering doing the song (the Edge doesn't even know the chords yet!), but the film follows this with the band at and outdoor concert performing the song perfectly. The way the scenes flow, we're made to think they stepped off the bus and nailed the song with no rehearsal. Personally, I think that was the magic of the movies right there.

But the films hands-down oddest, most stilted, most fishy-smelling scene takes place after a concert performance of In God's Country. The band rush off stage and gather in the wings. I'm going to try to transcribe it for you:

Bono to Larry: "Really smashing the cymbals there!"
Adam asks a stage hand for a tissue, even though the box is clearly within his reach.
Bono to Adam: "On Love Comes to Town, watch the third verse, not the first, not the second."
Adam: "We should all be looking at Larry?"
Larry: "Edge is on a completely different timing as usual." The Edge smiles as they walk back out.

I might have missed some of the subtitles, but that's the gist of it. I watched this scene four times and went through a host of emotions, from confusion to denial to anger to bafflement. I didn't find it genuine at all. Every time I watch it it seems more and more like a busted improv skit, like the film director told them to pretend they were working out the encore, when really they just wanted to stand around, take a drink or two, and catch their breath.

When they were in Memphis why didn't they visit the site of MLK's assassination and juxtapose it with the performances of MLK and Pride (In the Name of Love) (which features the lyrics, "early morning / April 4, shots ring out in a Memphis sky")? Would that have made too much sense?

One of the band's best songs, All I Want is You, plays over the credits. If you're talking from a pure filmmaking standpoint, Reality Bites used it better.

I've been regularly listening to the song Where the Streets Have No Name for 23 of my 32 years and I never before realized that the lyric was "still building and burning down love." I always thought it was "burning them down." I like my way better.

Ever wonder why Bono is in a sling during the scene in the church with the gospel choir? It's because he fell and disloacted his arm earlier in the tour. Also, that poster image with him shining a spotlight on the Edge? Apparently during this routine one night Bono fell backwards and the light hit him in the chin, leaving a scar. Unfortunately, neither of these incidents are in the film.

Rattle and Hum didn't catapult director Phil Joanou to fame. According the the Internet Movie Database, his most notable resume entries are the Rock film Gridiron Gang and an episode of 3rd Rock From the Sun.

During the aforementioned San Fransisco performance of All Along the Watchtower, Bono runs up to a huge sculpture mid-song, and spray paints on it. City authorities weren't too happy, and the band later issued an apology. So, a socially conscious band like U2 must have had a good reason for defacing someone else's artwork, right? The message Bono wrote on the statue must have been a call for world peace, or a deep philosophical thought, right? Uh, no. Here's what he wrote: "Rock 'n roll stops the traffic."

Where were two of the better songs from the Rattle and Hum album, Hawkmoon 269 and God Part II?

Critics found Rattle and Hum to be self-indulgent, and it didn't exactly burn up the box office. But most U2 fans regard it fondly. And that's a good summary of the film. It doesn't belong anywhere near the top of a list of great pop music movies, but as a document of an important band at their apex, it's invaluable.
Posted by Paul V. Allen at 3:49 AM

I first saw U2 perform live in July 2005, and I haven't stopped talking about that experience yet!! : lol: Over the years, I've had the good fortune to see them many times, U2 band and their show improve with each new tour! Next weekend I'm gonna see them again since I can compare and get cheap tickets from Ticketwood.com ; so I can save some dollars to the next concert ...I’m so excited!!
http://www.ticketwood.com/u2/