Thank you for the music, but no thanks to the rest. 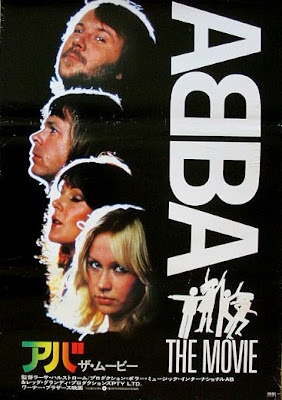 In 1977 Swedish pop group ABBA were riding high. They had released a hit album per year since 1973, culminating in 1976's worldwide smash Dancing Queen (from Arrival), which catapulted them to superstar status.

A movie was a logical next step.

In March of 1977, ABBA came to Australia for a weeklong tour. The band were especially popular there with 6 number one singles and an additional 4 in the top ten, more than even in their homeland.

Filmmaker Lasse Hallstrom (yes, him) came along to document the event, but ABBA: The Movie is not a documentary, nor is it a concert. Instead, it's a combination of both, with a fictional story thrown in for good measure.

The movie's main character is Ashley Wallace, (Robert Hughes) a DJ at an country music station in Sydney, Australia. His boss assigns him to get an "exclusive in-depth interview" with ABBA to air a week hence. Why ABBA, on a country station? Well, because "the pop scene's never been touched like this before." I think that really means, "screw our format, let's cash in on this phenomenon."

It turns out that the boss' trust in Ashley is misplaced, because Ashley has no idea how to get an interview with a super group. His first approach is to try to meet the band as their plane lands, along with hundreds of press members and fans. Ummm, yeah, that's not going to work. He finds out that there'll be a press conference, so he drives across town, yelling out his window at other drivers, asking how to get there. Also, as he drives, he realizes how deep Sydney is in ABBAmania. People everywhere are wearing shirts and holding signs for the band.

While this madcap scene is taking place, we cut to the already-in-progress conference, where Bjorn (guy #1), Benny (guy #2), Agnetha (the blonde one), and Frida (the red head) are handling the usual questions. No, they don't drink or do drugs. They don't like touring but they do it for the fans. The best is when one reporter asks Agnetha how she feels about winning a "sexiest bottom" award. She responds, "How can I answer that? I haven't seen it." (You, however, can judge for yourself in the very next scene, when she wears skintight white pants).

Of course Ashley misses the press conference, so he decides to go to their concert that night, but genius that he is, he fails to bring his press pass or realize that he might need a ticket to get in to the sold out show. While this goes on, the film treats us to generous footage of ABBA performing Tiger, S.O.S., and Money Money Money. During the latter, Hallstrom cleverly cuts in footage of ABBA merchandise, including drinking glasses, buttons, and books.

The next day Ashley goes to the Sydney Opera House and basically accosts the band while they are in the midst of a photo shoot. At this point two things are becoming clear. One is that Ashley is pretty much an idiot, and two is that the film is going to run this he-can't-get-an-interview thing into the ground. As evidence, the next scene finds Ashley calling his boss and saying he needs more time with the band, and needs to follow them to their next stop, Perth.

And so it goes. Ashley follows ABBA from Perth to Adelaide to Melbourne, each time failing to connect with the band, each time approaching them in the stupidest way possible (sneaking backstage and asking random people "Have you seen ABBA?", for instance). Interspersed throughout is concert footage from the Australian tour (though it doesn't always match up with the "story"). Songs performed include He Is Your Brother, Waterloo, Mamma Mia, Rock Me, I've Been Waiting For You, Get On the Carousel, I Kissed the Teacher, I'm a Marionette, Fernando, Dancing Queen, and So Long.

To be fair, the movie does throw in some other tricks as it goes on. When Ashley realizes he's not going to get enough of an interview with ABBA to fill up two hours, he starts doing people-on-the-street interviews about the band. The first round of these result in an inordinate number of people saying they enjoy the band because they are "clean." Later, he interviews children about the group. Some say they like ABBA's songs "because they're good," but one says he doesn't care for them because "they show off and wear too many clothes" (he obviously hasn't seen the footage of Frida's ass cheeks hanging out on Why Did It Have To Be Me). The interviews culminate with a group of young ballet students singing along to Ring Ring.

Also breaking from the usual format are a couple of dream sequences that double as music videos. The most ridiculous is The Name of the Game, which finds Ashley fantasizing about having all access to the band. At first he's enjoying a picnic with the four of them, then his he's a psychiatrist and Agnetha is lying on his couch. Hmmm. He goes on to imagine himself enjoying a fancy candlelit dinner with the whole group, hanging out in a western bar, going golfing, and sailing. Ashley's fantasies are heavy on the girls (though he gives Benny hugs several times throughout the sequence), and he does wake up somewhat sweaty, so conclude what you will.

At the 11th hour, after multiple failures, Ashley gets smart and approaches the band's manager, Stig Andersson, about an interview. Stig agrees to it, for the next day at 10 AM. Ashley, though, forgets to set his alarm and misses the interview. Then, in a dictionary definition of the term "dumb luck" he ends up on an elevator with the band and gets his interview.

The movie ends with Thank You For the Music, presented in multiple formats (with shots of Australian fans, the group in the studio recording, and on stage performing). The end.

Executive #2: That's okay, how about a concert film?

Executive #1: I thought about that, but what if kids just go see that movie instead of actually going to an ABBA show? We'd be robbing Bjorn to pay Benny.

Execuitve #2: Okay, what if we do a combination of the two? We'll bang out a script that allows the band to make minimal non-musical contributions.

Making a film where you have to work around your main subject is nothing new. See Can't Stop the Music, That's the Way of the World, or Rock Around the Clock for evidence. The tactic can work, but you have to put a compelling, appealing story in place to make it happen. ABBA: The Movie, fails to do that.

If you couldn't tell, the scenes with Ashely the DJ drag the film down (and unfortunately that accounts for about 50% of the movie). For one, the character has zero appeal or personality. He just seems annoyed and harried most of the time. Plus, he keeps making boneheaded decisions. People making stupid decisions can (and often does) make for good entertainment, but in this case it's just tedious. By the film's halfway point, I was actively rooting for him to fail in his quest to get an interview.

Even worse, when the film gets to that point it's been building to the whole time, Ashley's "gut-level dialogue" with the band, we don't even get to see it. Instead, the film goes into a weird video for the song Eagle. This involves footage of a soaring eagle, naturally. The rest of it is Agnetha and Frida hanging out in a colorful metallic wind tunnel.

It's too bad, because the concert footage is very well-filmed, and the performances by the band are sharp. Even the few non-musical scenes that feature the band are good. Beyond the press conference, there's a scene with the four of them in a hotel room chuckling over the press about their first night's show, including a bogus account of their supposed lodging demands. Best line: "What does kinky mean?" Hallstrom clearly would have been better off doing a straight up documentary / concert film hybrid.

Lasse Hallstrom, in case you don't know, is the Swedish Oscar-nominated director of such hearty fare as My Life As A Dog, What's Eating Gilbert Grape, The Cider House Rules, The Shipping News, and Chocolat. ABBA: The Movie was his second film, and not one that he received any Oscar nominations for.

Ashley's sign-off catchphrase is "what you see is what you get," which is kind of strange for radio, if you think about it.

At this point in their careers, the band wore white warm-up jackets, each with an A (the girls) or B (the guys) in red on the back.

Watch for the creepy personal trainer in the rainbow suspenders. That guy could get his own horror movie franchise.

In the concert sequences, the number of musicians on stage is staggering. You thought Parliment / Funkadelic had a lot of members? There are at least 10 players (drummers, horns, basses, guitars, keys, back-up singers) in addition to the four core members, and that doesn't include the string section and a creepy clown that serves as an emcee.

I like that Hallstrom didn't present a sunny, public relations view of ABBA. As mentioned, not all of Ashley's on-the-street interviews are necessarily positive. There's also a non sequiter scene at the end of the movie where Ashley's cabbie complains about the previous night's concert. He says it featured "too many white lights" and that the band "took their clothes off."

As loathe as I am to say it this is another one of those films it's hard to completely dismiss. Yes, it's half flawed, but it IS interesting if you want to witness a pop music juggernaut in action. If you're only looking to celebrate the music of ABBA, you're probably better off with Mamma Mia.
Posted by Paul V. Allen at 3:49 AM