And nothing is better than that. Is it? 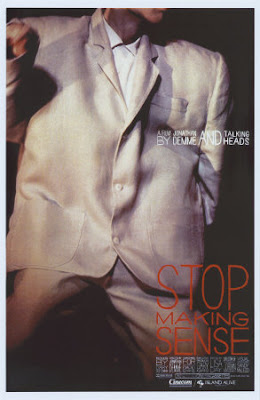 My second favorite film of the Baby, I'm a Star project, and the best concert film ever made is the result of a band at the height of their performing prowess, a frontman leader with a design background, and an A-list director. Stop Making Sense is so good, it deserves a running diary (with apologies to Bill Simmons). These are my thoughts, recorded live as I watched.

00:00:15 The distinctive, hand-written credits roll silently, over a greyish background. I feel like I'm about to watch a David Lynch movie.

00:00:40 Credits read, "Conceived by the stage by David Byrne." What that means is that all the crazy, innovative sequencing, lighting, and backdrops came out of David Byrne's head. It also means that concerts can and should do more than they do. It's 25 years later and we've still got boring old light shows.

00:01:10 Directed by Jonathan Demme. At this point, he'd been directing for 10 years, but his star hadn't really risen. He'd make Something Wild the two years after Stop Making Sense, followed by a couple of little films called Silence of the Lambs and Philadelphia. Maybe you've heard of them.

00:01:20 Byrne appears, but we only see his shoes, walking out on to the stage. He sets down a boombox, steps up to the mic and says, "Hi, I've got a tape I'd like to play for you." He starts up the simple drum machine beat, and begins to play along with an acoustic guitar. The song is Psycho Killer. Qu'est que ce?

00:02:25 A brief shot of the audience, just to let you know they're there. Unlike many concert films, Stop Making Sense doesn't indulge in shots of fans enjoying the music (at least until the end of the movie). It makes you feel more like you're actually there.

00:02:35 We see that the stage is bare, with no curtain. Various behind-scenes-materials (boxes, ladders) can be seen, and the lighting is brightly stark.

00:05:03 Byrne reels around the stage to the beat, even as it breaks down. This is very much an influence of early hip-hop, I'm guessing.

00:05:40 Stage hands begin to set up behind Byrne even as he finishes the song.

00:06:31 Bassist Tina Weymouth enters, and the duo strike up one of the prettiest Talking Heads songs there is, Heaven.

00:07:46 Disembodied harmonies come in. I had always been under the impression that Tina was singing them, but I noticed this time, for the first time, that she has no mic. I assume one of the background singers was doing it offstage, but the film gives no evidence of this.

00:10:23 Drummer Chris Frantz (Weymouth's husband) enters. He's excited to be there. The trio starts up with Thank You For Sending Me An Angel, from the band's second album More Songs About Buildings and Food. At this point the concert / film are playing out like a strange little origin story of the band, since these three were the original founders.

00:12:51 Guitarist Jerry Harrison enters and they go into the mildly funky Found a Job. The song really shows off their chemistry and familiarity, especially when a wide shot shows Byrne, Harrison, and Weymouth's legs and hips in synch with the song's rhythm as they play.

00:16:27 Harrison switches to keys, and backup vocalists Edna Hope and Lynn Mabry come out, along with percussionist Steve Scales. The septet launch into Slippery People, from the band's then-new album Speaking In Tongues.

00:18:03 Byrne gets a little smirk on his face in response Hope and Mabry's singing. You can tell he likes what he hears.

00:19:18 Byrne does a dance that's reminiscent of GOB's imitation of a chicken on Arrested Development, and the two singers copy him.

00:20:40 As the song climaxes, Frantz appears to be one of the happiest men alive!

00:21:10 The band's line-up becomes complete with the addition of guitarist Alex Weir and keyboardist Bernie Worrell. In case you're counting, we're up to nine members, and five of them are black! The new monster-sized Talking Heads let loose with Burning Down the House.

00:24:45 Jerry (back on guitar) awkwardly attempts to dance with Edna and Lynn.

00:25:30 Life During Wartime begins. I'm finding it difficult to describe just how much energy and joy is pouring out of the band at this point. Byrne especially is going nuts during this song. He runs in place with the rest of the standing members of the band, does the twist, moves like a belly dancer, runs circles around the mic, falls on the floor and convulses, and does laps around the stage set-up. He must have been in fantastic physical shape.

00:30:02 Frantz can be seen singing along with the song's lyrics even though he doesn't have a mic. I love it when non-singing band members do that. I think it shows they really enjoy their own music.

oo:31:15 The song ends. Byrne to the audience: "Does anybody have any questions?"

00:31:30 An extended pause begins. This makes it feel like a real show, where you wait for set-up. But when we come back it's definitely a different night (the film was edited together from three different concerts). Frantz and Weymouth are wearing different clothes, and Byrne is put back together (his hair had become loose, his shirt untucked, etc. on the last song).

00:33:00 Making Flippy Floppy, another song from Speaking In Tongues, begins.

00:37:04 The backdrop changes from black to red, and the futuristic blues tune Swamp begins.

00:41:40 The lighting changes again with the new song What A Day That Was (the song is actually not a Talking Heads song; it came from Byrne's solo project The Catherine Wheel), with very stark under lighting on Byrne's face. It's like when you shine a flashlight under your face to tell a ghost story. When the camera goes back for a wide shot, the effect creates huge shadows of the band members on the back panels. It's very cool.

00:48:10 My favorite Talking Heads song, This Must Be the Place (Naive Melody), begins. There's now a standing lamp on stage, and the backdrop is flashing pictures of things like books, furniture, landscapes, cityscapes, and body parts. The stage feels very warm.

00:49:48 I just realized that Byrne has those pointy Star Trek sideburns.

00:50:09 Strange moment where Weymouth looks lovingly at Byrne, Hope, and Mabry as they harmonize.

00:53:46 Once In a Lifetime. Byrne is wearing boxy nerdy glasses and seems intent on recreating the video, with the convulsions, contortions, hand chopping, and head-hitting.

00:59:30 In order to give Byrne a breather, the Tom Tom Club (a side project featuring Frantz and Weymouth) take over and do Genius of Love, the song that has since become an R & B and hip hop sampling favorite, most notably on Mariah Carey's Fantasy.

01:01:30 I just noticed that Weymouth bears an uncanny resemblance to Lex Luthor's girlfriend, Miss Teschmacher, in Superman: The Movie.

01:04:35 The moment we've been waiting for arrives. It's the debut of the BIG SUIT! Byrne looks sublimely ridiculous as a blazing version of Girlfriend Is Better begins. A stage hand walks around with a spotlight and shines it below various band members to cast huge shadows on the backdrop.

1:09:50 A greenish/blue light bathes the stage as the band eases into their version of the Reverend Al Green's Take Me To the River.

1:13:24 Byrne has doffed the coat of the BIG SUIT, but is still wearing the pants. We can see Mabry laughing at the sight of this.

1:14:51 Byrne introduces the band members while wearing a red cap someone has thrown on stage.

1:17:53 The final song, Crosseyed and Painless (from the band's most critically-acclaimed album, Remain In Light), begins with Byrne jamming on the guitar and playing a slowed-down instrumental version of the song's chorus before launching into its regular high-tempo self.

1:24:00 The first extended shots of the audience, dancing in the aisles. A couple of things to look for: 1) The mix of white and black fans at the concert. Very few bands these days cross over in this way. 2) The kid with the stuffed unicorn.

1:24:45 As the band jams the song's coda, the stage crew members come out to get props.

1:25:11 Chris Frantz throws his drum sticks to the audience, because it's always a good idea to throw hard wood projectiles into crowds of people.

1:26:27 Those of you hoping for an encore will be disappointed. That's the show. Credits roll.

1:27:40 No music on the credits, just a shot of the stage, now bare once again. And thus ends the best concert film ever made. Of course this statement is contingent on 1) you actually enjoying the Talking Heads' music, and 2) there not being a concert film you enjoy more than this one.
Posted by Paul V. Allen at 3:49 AM