She's got the stuff that he wants 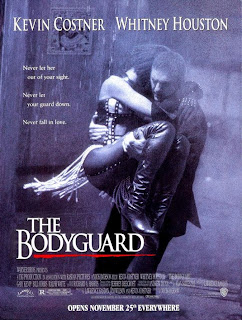 If there's such a thing as suffering in comparison, then it follows that there must also be such a thing as benefiting from comparison. That's the case here. In no way am I deluded into thinking that The Bodyguard is a great movie, but when pitted against some of the dreck I've watched for this project, it might as well be a masterpiece.

Frank Farmer (Kevin Costner) is an elite personal bodyguard. We know this because the opening scene shows him sitting on a man in a parking garage, having apparently just fended off an assassination attempt. Rachel Marron (Whitney Houston) is a massively popular singer and actress whose life is in danger. We know this because in the second scene a television in her dressing room blows up. So of course Frank is hired to protect her and her son, who is played by Bobby Brown (okay, not really).

We find out that Rachel has been receiving strange ransom note-style letters, and that someone has snuck into her mansion and "masturbated on the bed." Rachel comes with a large entourage, including an existing bodyguard, a manager, a family friend, and a bitter sister. Frank immediately clashes with almost every single one of them. So basically we follow as Frank follows Rachel through a series of outings and appearances and bits of danger.

Along the way they fall in love, though why that happens isn't completely clear. It must be physical, because he seems disgusted by her personality, and he doesn't have one himself, so she can't like him for that reason. Anyway, as the googly eyes go on, the mystery of who is threatening Rachel deepens. At first it appears to be a David Spade lookalike, then someone else. Anyone with minimal powers of deduction will be able to figure out who the villains are here.

The movie culminates in a murder, and a climactic final scene at the Oscars, where Rachel Marron is the favorite to win Best Actress (wishful thinking on the part of the film's producers?). The mystery is solved, Frank saves the day, and I Will Always Love You is sung.

What Really Happens and Thoughts:

Let's talk about the actors. Kevin Costner is sort of an enigma to me. I'm deeply ambivalent about him. He's not going to entice me to see a certain movie, nor is he going to dissuade me from seeing it. This movie might actually help me get over that ambivalence a bit, because he bothers me here. First, he looks like he was filming JFK simultaneously, because though it takes place in the '90s, his look is pure early '60s with the suits and the short hair. It's disorienting.

The other problems I have with this character are probably not Kevin's fault. We are supposed to buy him as a badass, but it just isn't convincing. Sure he likes samurai movies, orange juice, drives an El Camino, and he has NO sense of humor, but do I trust him with my life? He is supposedly a tortured soul because he wasn't there the day Reagan got shot, and he blames himself. Man, aside from the guilt about Brady, you'd think it'd be a source of pride! Anyway for me the telltale sign when he took a bullet for Whitney in the end, I really hoped he would die. Maybe I was just in a tragic mood.

As for Whitney, she doesn't have to do much other than play herself, but once again, let's look at this in comparison. If you take her versus Madonna, Mariah, and Britney in their first starring roles, she easily bests all of them. And the songs for this movie are top notch. I Have Nothing is, for my money, the best song of the lot, and they sure get a lot of mileage out of it. I think the filmmakers underestimated how popular I Will Always Love You would be, because it definitely gets second class treatment (we don't even hear Whitney's version until the end). Anyway, I wanted to go out and buy the soundtrack right away, which is what any pop star vehicle should compel one to do.

The interesting thing about this movie as a pop star vehicle is that it picks and chooses what conventions it wants to stick to. Having the pop star play a barely autobiographical version of herself? Check! Making the pop star the center of the movie? Nope. Lots of songs by the pop star? Check! Lots of performance scenes? Nope. So what's going on? Thinking outside the box? Shame on them. I would be inclined to label this movie a hybrid: part pop-star vehicle, part movie featuring a pop star as one of the cast. So this leads me to one of two conclusions: 1) the filmmakers were brilliantly playing off of expectations, or 2) the filmmakers were completely clueless.

I did a bit of research on the filmmakers, and this actually has a pretty good pedigree going for it. The writer was Lawrence Kasdan, who is responsible for The Empire Strikes Back, Body Heat, and The Big Chill, among others. He's also a director, and I'm not sure why he didn't take the reins here. Instead we get Mick Jackson, who has a very undistinguished resume, besides one gem: L.A. Story. So I don't know why this movie wasn't a bit better.

Anyway, going back to conventions, there's one this movie does stick to, in a bizarre way. I've written about the Purple Rain blueprint of ending the film on a freeze frame shot of the pop star triumphant. Well, this movie ends in a freeze frame, but it's of Costner, standing stone still with a completely sour look on his face. The freeze goes on past the point where you're comfortable with it.

Finally, one thing I loved about this movie was that it chose to exist in a world of fake celebrities, songs, and movies. This brings up fond thoughts of Seinfeld and the strange fake movies they would see, such as Death Blow, or Chunnel. In The Bodyguard we get things like Queen of the Night, and Hot and Cold. Who wouldn't want to see these Oscar-nominated movies?

Good songs, good show by Whitney, but not probably not enough to completely satisfy the fans, because the movie can't decide what it wants to be. But once again, it could have been A LOT worse.
Posted by Paul V. Allen at 8:33 PM