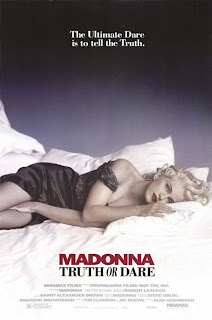 Had it gone in a different direction, this project could have easily focused purely on the film oeuvre of Madonna in all of its shame and glory. Is there another actress who has received more Razzies (the ceremony which presents itself as the complete opposite of the Oscars, rewarding extraordinarily bad film work), and yet also won a Golden Globe? She's got Shanghai Surprise, Body of Evidence, The Next Best Thing, and Swept Away to her credit, and yet also can lay claim to Evita, A League of Their Own, and Desperately Seeking Susan.
I'll admit my bias right here: I have a lot of love for Madonna. I think if I could only own one album it would be a serious decision between The Beach Boys' Pet Sounds and The Immaculate Collection. But, like any superstar, it's impossible to adore her fully and completely (especially the newer calcified version). There's too much baggage there, as we'll see.

The filmmaker followed Madonna around on her 1990 Blonde Ambition tour supporting the Dick Tracy (also a stinker) soundtrack I'm Breathless. Along the way he captures Madonna at her most candid. He also documents the troubles and triumphs she experiences, including a visit to her roots in Michigan, controversy in Canada, the tedium of touring and pulling off an ambitious stage show, and of course sex and romance. What emerges is a portrait of Madonna as a tough, sometimes raw young woman who has been through a lot and is still in the process of growing up. There's also a strong presentation of her with her dancers and entourage as a caring den mother. And this was before she even had kids!

The documentary bits in black and white are interspersed with color scenes of various song performances.

This movie, though it first showed Madonna as the shrewd businesswoman she is, also documents her careening into the worst point of her career. In some ways she was still very much searching and unsure of herself, as evidenced by the Sex book and Erotica album that came out the next year. Knowing that this will happen, and that she will rebound in typical heroic fashion makes for compelling viewing.

That said, as a documentary, this is rarely as gripping as the format has the potential to be. Perhaps it's because the events that occur are hardly ever dramatic. As a result, the beginning especially seems like we are in for a long tedious ride. Initially, Madonna comes off as a self-absorbed bitch-on-wheels. She plays bullying games with her staff, complains about audience members, and her narration seems like what hyper self-analytical college students sit around and talk about.

On top of that, the first couple of musical numbers are lip-synched and choreographed and do nothing for me. But as the movie progresses and we see more of these numbers that were in the show, the cumulative effect is an appreciation for how much work it must have been to pull that off every night. Personally, I prefer the band that comes out on time, says little but "Hello" and "Thank you" and kicks the ass out of their songs, but I can appreciate "high concept" too.

The same happens with the documentary. Slowly the scenes add up and we begin to get a more fully realized portrait of Madonna. There's a scene where her father (who looks startlingly like Ralph Nader) visits with her, and it's as awkward as any other parent-grown child interaction. There's another scene where she visits her mother's grave. It's a bit overwrought, but still affecting.

When she plays in Detroit she meets with a childhood friend named Moira, and it's a very sad scene. Moira is obviously living a hard life, but wants Madonna to be the godmother of her baby. Madonna somewhat gently brushes her off. It gives a taste of some of the lesser side of fame.

Finally, also contributing to the emotional investment of the film is the afforementioned relationship she has with her dancers. She obviously cares about them, and even has to play peacemaker. She's like a really hot teacher. But then this is all negated at the end with the famous titular truth or dare game, and a bizarre sequence where she has them visit her bed one by one.

Warren Beatty (he and Madonna were famously involved at this time) is actually a voice of reason in the film. At one point he remarks that Madonna "doesn't want to live off camera."

The parade of celebrity guests that visit backstage is dizzying. We get Al Pacino, Mandy Patinkin, Lionel Richie, and Kevin Costner (sporting a righteous mullet). He calls the show "neat," and after a few seconds of awkward conversation leaves, only to have Madonna stick her finger in her throat behind his back. How would you like to be him and have this moment immortalized? Terrible, yet satisfying.

I wonder what the percentage of this movie involves Madonna getting her make-up done. I'm guessing 18.5 at least. This is a project for somebody.

Though not a thrilling documentary, it will be important someday for the depiction of a certain time of Madonna's life. However, non-fans and hatas should approach with caution.
Posted by Paul V. Allen at 4:23 PM