It couldn't get no worse! 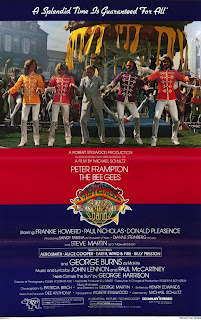 When I was in high school, at the tail end of my initial obsession with The Beatles, I bought a country tribute album to the band. This was when "country music" was a four-letter-word in my vocabulary. My Beatles obsession was such that I probably bought it just because it had a charming John Lennon drawing on the front. But a listen to it proved something I'd always suspected: It was impossible to ruin The Beatles. Little did I know that in 1978 Robert Stigwood, Peter Frampton, and The Bee Gees nearly accomplished just that.

Sergeant Pepper is a Glenn Millerish figure who, as the song says, taught the band to play 20 years ago today. And they were the toast of wartime; an inspiring bunch. This is all told to us by a narrator who sounds like George Carlin, but actually turns out to be George Burns. Now, in modern times, his grandson Billy Shears (played by Peter Frampton, looking exactly like Roger Daltry) is getting the band back together as a modern rock group! The other three members happen to be Robin, Maurice, and Barry Gibb, The Bee Gees!

The band's first gig is a revelation, and of course they're ushered off to California to become big rock stars. Unfortunately this means the Billy must leave behind his foxy, foxy girlfriend Strawberry Fields. Why she can't go along to California, other than for dramatic narrative purposes, shall remain a mystery. As happens with any well-brought up, level-headed band, they are immediately corrupted by the bacchanalia of the record executive lifestyle, which involves lots of loose women, gorging at medieval style dinners, and large spinning record coffee tables. Billy cheats on Strawberry right away.

Despite this lack of focus, the band becomes immensely popular, and gains the attention of the malevolent Mean Mr. Mustard, who is played by a British actor Frankie Howerd. He's is a tremendous ham (mmm, mustard and ham). This leads to a series of misadventures and elaborate musical numbers. Actually to call them musical numbers is a bit misleading, because like Tommy, this whole movie is dialogue-free. There is Beatles music from wall to wall.

In the end, the band rediscovers the power of love, Huey Lewis style, and this leads to the defeat of Mr. Mustard and his minions, but also to the death of sweet, hot, innocent Strawberry Fields. This is a maddening moment, because she is the ONLY likable character in the movie. But fear not! Billy Preston shows up, playing some Jesus/religious icon figure, and brings her back to life.

Okay, this movie really fucking sucks. Almost everything about it is annoying, from the bad acting to the poor film stock. I can't tell you how many times I wanted to hit fast forward. I don't think there is any other movie besides Showgirls that featured so many career lows in one place. Here are some of them:
In Conclusion:

This movie does the unthinkable. It makes you annoyed with The Beatles. You'd like to think that this shameless manipulation of their work was fought tooth and nail by The Beatles themselves. For heaven's sake, John was still alive when this was made! I'm guessing that it was probably Paul's decision, to fund his pot habit through the '80s. A splendid time is guaranteed for none!
Posted by Paul V. Allen at 4:43 PM

Yes, I admit that nearly all you say is true. Perhaps I like the punishment but, for me, there is some small redemption in this constantly malligned movie. It's campy, corny and contrived but I like it. I must like it because, not only do I own the VCR but also the DVD. For whatever reason, I make a point to watch this movie once a year.

Sorry, but I vastly disagree with this author. I don't knwo what else could be done with all those irreverent and inane Paul M songs....what was expected...serious drama? My favorite part of the movie is still Steve Martins' version of Maxwells' silver hammer. He makes me laugh every time. Obviously, the critics must not have seen any of the Beattles movies they themselves where in. George Martin merely followed the same formula he'd used before.