It was all downhill from here 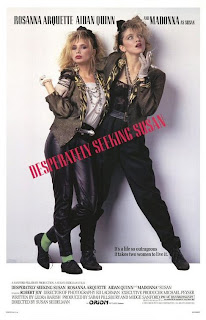 Desperately Seeking Susan is a stylish, surprisingly good movie about a rich woman who discovers the joys of letting your soul fly free and bohemian. It's a very '80s update of The Prince and the Pauper or City Mouse Country Mouse stories. Rosanna Arquette has a comfortable but soulless life until she starts following a series of ads concerning the titular Susan (played by Madonna of course). A complex series of events leads to her being mistaken for Susan, the two women switching places, and high jinks ensuing! She falls in love with Aiden Quinn, has some trouble with some thugs, and works in a nightclub. Susan, meanwhile, enjoys the high life for awhile.

Rosanna Arquette looks rather foxy in this movie. I've always been a Patricia man myself, but watching this, I can see why Toto made that song about Rosanna. What was that called again?

Don't freak out, but Madonna is actually good in this movie! Sure, she tends to speak in one liners (a perfect way for non-actors to come across well in movies), but she is effective, funny, and seductive. It makes me wonder if she'd just stayed in smallish roles, such as A League Of Their Own, how much movie-going pain and heartache might have been averted.

Be sure to watch for the parade of pleasantly familiar faces. Here's a rundown of who to look out for: Rosanne's sister, Steven Wright (!), Dana's orchestra friend from Ghostbusters (the one who Bill Murray describes as "still very pale though"), Jon Turturro, and Richard Hell.

Madonna dances to Into the Groove in a club scene. This is an odd moment, because we're not supposed to be thinking of this character as a massive pop star, but how can we ignore it? She seems to enjoy her own music a bit too much.

Open your heart and tune in next time this movie is showing on cable.
Posted by Paul V. Allen at 10:11 AM