Every little thing is gonna tear them apart 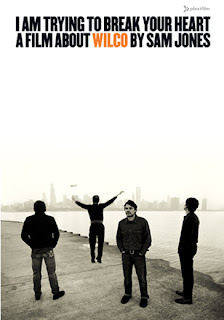 Novice filmmaker Sam Jones thought it might be a fun project to follow Wilco through the recording of their album Yankee Hotel Foxtrot. Their previous albums, AM, Being There, and Summerteeth were all big critical favorites and had garnered them a dedicated, if small, fan base. Jones was one of those fans, and with the delusion of a fan felt the band was on just the verge of a commercial breakthrough. So why not document the making of the album that would bring them international stardom?

It didn't quite work that way, but Jones got something even better. As sometimes happens, the stars aligned and a wonderful story fell into his lap.

When Wilco completed Yankee Hotel Foxtrot and turned it into their record company, the company flatly rejected it as not commercial enough. The band promptly bought the album back and sold it to another company which happened to have the same owner as their old label (in today's music industry there are really only three major labels). When it was released, the critics hailed the album as a masterpiece, and the first week sales were better than any previous Wilco album (which, granted, was still not a whole lot).

It's very rock 'n' roll to think of the record companies as completely clueless, and here we have concrete proof of it.

For my money, no form of film has more potential for thrills than documentary. It is an often-abused, cliched, and parodied format, but when done right, like Hoop Dreams, or this film, it is riveting.

More than just the shake-your-head story of an innovative album being rejected, Jones also captures that old favorite, band infighting. Jay Bennett and Jeff Tweedy have a visible tension between them that grows as the film progresses and eventually leads to Bennett quitting the band. It's a shame really, because they obviously did great work together, but it's also thrilling to see. There's an argument between the two over a minute detail of editing that just completely sums up how silly things can get between two people. Jay's post-quitting interview is a textbook case of self-delusion. Watch for it!

It's a bit strange to spend so long looking at people you normally just listen to. So, I found myself my making mental connections to more familiar faces. For example, Jay Bennett resembles a more studious version of Scottie, from Boogie Nights. Also, the band's manager Tony could make some side money as a James Garner impersonator. Finally, the similarity between Jeff Tweedy and the Man Behind the Curtain from The Wizard of Oz is eerie.

Despite the wonderful music they make, this band can come off as a bit humorless and self-possessed, and this documentary bucks that perception with several small touches. The best of these is a scene in a Wendy's with Tweedy and his wife and kids ordering and attempting to put together enough cash to pay. It blows the roof off any perceptions of a debauched rock star lifestyle.

This movie also has the advantage of being the best-titled of the lot (Stop Making Sense taking a close second). It is, of course, the name of the first track on Yankee Hotel Foxtrot, but there's something more to it. I think it's the fact that the I and the Am aren't contracted. It sounds so formal. It's almost as though it's a response to something else.

Pure Imagination from Willy Wonka and the Chocolate Factory plays over the final credits. I can find no logical reason for this, but it's a brilliant touch nonetheless.

Beautifully filmed in black and white and expertly edited from what must have been a TON of footage, a fan could ask for little more than this. Even non-fans are likely to be sucked in by the sheer arc of the story and appeal of the people involved.
Posted by Paul V. Allen at 6:54 PM


Also, as a thank you for visiting my site, I'd like to tell you about a great site that is giving away a FREE DVD Camcorder! Just click the following link and enter your Zipcode to see if the promotion is available in your area!