Michael Jackson egomania when we could take it 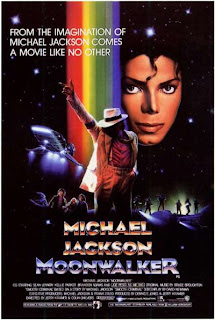 In the future, lots will be written about this time in Michael Jackson's life. One of the most common sentiments I hear in reference to him besides revulsion is sadness. He made so much vital and exciting music that it would be a shame for it to be tainted by his significant personal problems.
Sadly, it's getting to the point where we forget how HUGELY popular Michael was, and for the right reasons. I mean, Thriller has sold 45 million copies world wide! He won eight Grammys in one night! Bad had five number one singles! Michael's transformation from a child star to an adult star was something the world had never seen before. At the apex (or at least plateau) of his popularity, Michael made a movie. It's not a continuous story, but more of a visual scrapbook.
What Happens:
We start off with a performance montage of Man in the Mirror which is replete with many shots of fainting audience members, and interspersed clips of Jimmy Carter, Ronald Reagan, Gandhi, JFK, RFK, Martin Luther King Jr, Mother Theresa, starving kids, etc. It's kind of a downer opening, but it strives for some sort of relevance, punctuated by Michael standing like Jesus on the cross. Make your own interpretations and insert them here.
Next we get a well-edited retrospective of Michael's career, moving from the infectious sounds of the Jackson 5 (and the early proof of just how much talent this man contains), to the rat song Ben, to the highlights of his solo career. The best moment of this is easily his 1983 moonwalk at the Motown 25th Anniversary special. The crowd's reaction is an elated gasp. Wonderful.
This is followed by three music video clips. The first is a shot-by-shot recreation of the Bad video (which was directed by Martin Scorsese) using all little kids. It kind of reminds me of the Lost Boys from Hook, and creeps me out a little.
The clip for the song Speed Demon makes gratuitous use of Claymation. I can't knock this too much, because that was the shit back in those days...remember the California Raisins?
The next one is my favorite. It's a video for a Bad b-side called Leave Me Alone, which is definitely in my top 5 favorite Michael songs. Not only is the song great, the production values of the video are outstanding. It was done in an arresting animated collage style (the Talking Heads used it in their And She Was video), and features Michael directly addressing the odd media image he has acquired. Not only do countless tabloid headlines fly by, but he also passes his supposed shrine to Liz Taylor (accompanied by Bubbles the chimp of course), and dances with the Elephant Man's bones. This sort of willingness to self-parody is what is desperately missing from modern-day Michael.
Here's where it gets boring. "Smooth Criminal" is supposed to be the meat in the sandwich, but it's processed instead of deli. This is a baffling bit of filmmaking that concerns Michael and his three child friends (one played by Sean Lennon!) and a drug czar played by an extremely hammy Joe Pesci. Turns out that Michael is some sort of alien with the power to transform in to cars and robots. The high point of this is that it segues seamlessly into the very cool video for Smooth Criminal. And yet, how this is related to the rest of the story is unclear.
After the Smooth Criminal performance, I'd recommend fast forwarding to the climactic showdown where Michael turns into a robot and his face momentarily breaks apart. It's very prescient.
Finally, we wind down with an overlong performance of Come Together, which was to appear a full seven years later on the HIStory album. Then the credits roll over the group that worked with Ladysmith Black Mambazo performing a song called Walking on the Moon. This is a nice touch.
In Conclusion:
If you can make the mammoth effort to separate the Michael of today from the nostalgia for his glory days, this is an enjoyable viewing experience. The amazing thing is that no matter your feelings on Michael, at some point you are just likely to feel creeped out (or at least uncomfortable) by this film. Like I said, prescient.
Posted by Paul V. Allen at 8:46 PM