There's somebody home in Soulville 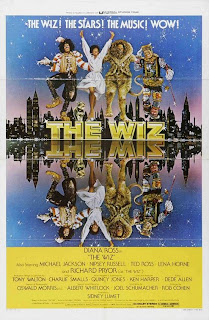 Two things about The Wiz:

First, I was completely unaware of it until the summer after my freshman year in college, when I worked at the tiny video rental section of Kroger's Grocery. The first time someone asked me if we had The Wiz, I tried to give her The Wizard of Oz, and then was completely baffled that when she informed that that this wasn't the right movie (afterall, I thought my movie knowledge rather complete). The woman, who was African-American, and an employee at the store, informed me gently but firmly: "It's the black version." It's strange how once something finally comes onto your personal radar screen, it's pretty much permanently there. After that, in one brief summer, I must have had six or seven requests for it, all from African-Americans.

Second, a friend of mine informs me that when he was young he watched The Wiz with a certain sense of fear, not at the events depicted on screen (which could very well inspire fright in a child) but because he thought as a white child it wasn't meant for him and he shouldn't be seeing it.

How unfortunate that a couple of white kids had to be so ignorant. Though this version of the Wizard of Oz story was created by African-Americans and features an all black cast, I feel that it's a big glib to reduce it to the description "the black version." It is also a modernized, urbanized version, with a surprising extra shot of pathos.

Dorothy is a 24-year-old Kindergarten teacher who lives in a New York apartment with her Aunt Em and Uncle Henry, and she's played by Diana Ross. On Thanksgiving, family and friends gather together, but Dorothy is visibly distant from any sort of connection. While cleaning up, Aunt Em admonishes Dorothy for her fear of getting out in the world. Immediately after, Dorothy's dog Toto runs outside and she follows him into a nasty snowstorm. She's swept up by a snow tornado (!) into another world. That world is called Oz, and it's a wasted, twisted version of New York, replete with graffiti people, human crows, ruined amusement parks, and evil subways.

Here, Dorothy has accidentally killed the Wicked Witch of the West, and inherited her magic silver shoes. However, all she cares about is getting home, and sets about to visit the Wiz, who rules Oz with his magical powers. Along the way she picks up companions who all lack something: a scarecrow, a tin man, and a lion.

They reach the Wiz, who directs them to kill Evelynn, the Wicked Witch of the East before he will grant their wish. They follow through on said mission, reveal the Wiz to be Richard Pryor, and find that they already possessed the things they had been searching so hard for. Dorothy goes home with a sense of self-assurance, strength, and love. Oh yeah, this happens amidst a startling amount of elaborate musical numbers.

Okay, let's get the negative out of the way first. I have to admit a bias about musicals, one that might be shocking from a person who would undertake a project like this. The bias is, I find most musicals boring. There are exceptions (My Fair Lady and The Wizard of Oz), but watching them at home I have a tendency to get antsy, and roll my eyes when people break out into song randomly. I'm sorry.

So my one question about The Wiz: Why so many musical numbers? I didn't clock it, but I would estimate that of the film's 135 minute running time, 115 are feature someone singing or dancing. This would be wonderful if all the songs were up to snuff, but most are just blandly inoffensive. And maybe some blame can be put on Sidney Lumet, a director with some distinguished films to his credit (Serpico, Network, and 12 Angry Men to name a few) but no musicals before or after this one.

Anyway, this movie's screenplay was written by Joel Schumacher, who also gave the world (gasp!) Batman and Robin (besides Simone, the single worst movie I've seen when expectation is taken into account). This did not bode well when I saw it in the opening credits, and yet I was able to set aside my bias against crap movies and realize that the dialogue is exceedingly well-crafted. Just the fact that the Scarecrow continues to pull relevant famous quotes from his body is impressive, but we get a lot of modernized, intelligent wordplay here.

Comparisons to the original Wizard of Oz are inevitable, and yet The Wiz holds up amazingly well against that classic. I won't bore you with all of the changes, but here are a few that really grabbed my attention:

Dorothy is 24? Yeah, right! Diana Ross probably insisted on this being the character's age, since she doesn't look a day under 44.

Is it me or does the melody of When I Think Of Home sound a little bit like I Just Can't Stop Loving You (from Michael's 1987 Bad album)?

The tape copy of the film I rented from Blockbuster was strangely worn out at the part where the lion is introduced. It's as if someone watched that part over and over again, obsessing over it for some unknown reason. I like to think about these sorts of things.

If you start Marvin Gaye's What's Going On album three minutes into this movie, it will play in synch with the happenings in the film. This is a complete fabrication.

Purely given the nature of this film (remake a classic, and use all black actors?!!), reaction is bound to be divisive. But disregarding race and tinkering, there are some movies that you just feel you could live in, like there's a rich world contained within. Few movies achieve it, but the ones that do are the ones that show attention to details, interesting dialogue, and character pathos. Even though it is flawed, this movie has all of that. And if you find yourself lacking a sense of wonder, watch it with a child…I'm betting it's a film that they will be both frightened by and irresistibly drawn to, just like the original.
Posted by Paul V. Allen at 8:28 AM

This is my ALL TIME FAVORITE. I am very intrigued by your comments and can appreciate them. This movie means so much to me and I am sorry for "black version" connotation... But it is what it is! lol... FYI- Luther Vandross is the writer and the voice in the "Can You Feel A Brand New Day?"

My 8-year-old daughter LOVES The Wiz. I'm now looking for the screenplay. Please inform me if you know how or where I can get it!
Thanks!
Alicia

Alicia, it looks like you can get it from Amazon: